From Psychology Today: “Few of us go around proudly announcing that we’ve been hallucinating. But many of us have. Estimates put the percentage of individuals in the adult population who hear voices when no one is speaking at around 13 percent. Perhaps more common is the phenomenon of feeling one’s cell phone vibrate, when, in fact, it has not. Evidence suggests that this is quite widespread — 68 percent of subjects in one study reported experiencing ‘phantom vibrations,’ and 13 percent experienced them daily…It’s clear that there are many non-psychotic individuals experiencing hallucinations.

What explains this trend? Recent research suggests that the answer has to do with how perception works. Rather than moving about the world passively perceiving things, it seems we actively anticipate incoming sensory evidence on the basis of prior beliefs. Perception is, in part, based on prediction. Hallucinations appear to have something to do with what the perceiver is expecting to happen. Part of the explanation for why you think your phone vibrated may be that you were expecting a text or call.

This research would both support and benefit from a change in the way we tend to think about hallucinations. The fact that many of us experience banal hallucinations should induce a reckoning with the usual stigma attached to the phenomenon. If one in eight adults experience hearing voices that aren’t there, perhaps regular folks and medical professionals alike should have more open minds about reporting such experiences and engaging with such reports in a manner that does not immediately pathologize them. This will help subjects wishing to share their experiences feel more comfortable doing so, and it will help researchers in the quest to explain what’s going on.” 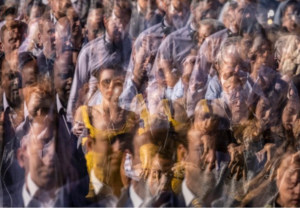