From i News: “Bethany is 17 years old. She is a girl who likes Bob Marley’s music, spending time with animals and being outside. Her father says she is the funniest girl he has ever met. But this teenager has not felt the sun or the wind on her face for nine months. And she rarely laughs. Instead, she is shut away in solitary confinement behind a locked door, fed three times a day through a hatch like a dangerous creature in a zoo.

She is obese from inactivity and has diabetes. Her small cell is furnished with just a foam bed and chair. Sometimes she gets books or colouring materials. Other times, a television is wheeled outside the big glass window. Her father finds visiting his daughter ‘horrific’ as he walks into the seclusion area and sees a row of rooms, often full of distressed young women. ‘Do you remember that scene in Silence of the Lambs when the agent Clarice Starling walks down the corridor to see Hannibal Lecter?’ he asked me. ‘Well, it’s like that.’

You might assume Beth has carried out some terrible deed to be locked up like this for the past 21 months. Even her father must kneel to speak with his daughter through the metal door’s hatch. But she has committed no crime. Instead, she is a victim of a callous state that treats a slice of society with cruelty and contempt. For this teenage girl has learning disabilities. And like scores of others, she has been left to rot by an inadequate health service while politicians break promises to help, and bureaucrats bicker over funding people in dire need.

Beth has autism, suffers extreme anxiety and cannot cope with stress – yet instead of being helped to enjoy life she is shut away in dismal seclusion. This has led to self-harm; a bit of a ballpoint pen stabbed in her arm was left there for weeks, removed only after this tragic teenager’s case was highlighted in a haunting edition of Radio 4’s File on Four. She uses ligatures made from her clothes, so staff strip off all she is wearing. The cruelty of her case spotlights shameful Westminster inertia. And, yet again, it shows how little this country cares about citizens with learning disabilities.” 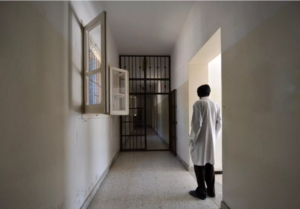