A new study led by Amy Orber examines the relationship between screen time and well-being for adolescents. Published in Nature, the rigorous examination uses Specification Curve Analysis (SCA) to account for common methodological problems in past research. The results of this study, the largest of its kind, suggest that screen time has a significant adverse but small effect on adolescent well-being.

“The evidence simultaneously suggests that the effects of technology might be statistically significant but so minimal that they hold little practical value,” Amy Orber and Andrew Przybylski, researchers from the University of Oxford, write. “The nuanced picture provided by these results is in line with previous psychological and epidemiological research suggesting that the association between digital screen time and child outcomes are not as simple as many might think.”

The amount of time children and teenagers spend on digital technology has doubled in the last decade, leading to mounting questions about the effects of such behaviors. With no previous generations to compare with which to compare the impact of this current phenomenon, researchers have wrestled with understanding the effects screen time may have on young people.

The current literature on the topic suggests harmful effects. Screen time has been linked to increased ADHD symptomology, depression, and in extreme cases, suicide. However, other studies have contested these findings, suggesting moderate screen time may have little to no effect on well-being overall.

“Given the substantial disagreements within the literature, the extent to which children’s screen-time may actually be impacting their psychological well-being remains unclear,” Orber and Przybylski write.

There are a few reasons variations in research may exist on this topic. The authors point to researcher degrees of freedom from multidisciplinary datasets, large social datasets featuring a high number of observations, and cross-sectional designs that make it difficult to draw conclusions about causation, as potential reasons.

“Large-scale datasets are simultaneously attractive and problematic for researchers, peer reviewers, and the public. They are a resource for testing behavioral theories at scale but are, at the same time, inherently susceptive to false positives and significant but minute effects using the alpha-levels traditionally employed in behavioral science.”

To carry out the most extensive study ever done on screen time and well-being for adolescents, the researchers designed the current study using Specification Curve Analysis (SCA). SCA is a process that allows the researchers to explore every possible analytical pathway possible from data. Rather than just reporting a handful of analyses, all possible analyses are reported. The rigorous process is posed as a possible solution to the problems that arise with data analysis.

After using the SCA method to compare specifications from three large datasets (n= 355,358), the researchers found that digital technology use (including smartphones, internet, and TV) had a significant, but small, negative association with adolescent’s well-being. To best understand this figure, the researchers put it in context:

“In all three datasets, the effects of both smoking marijuana and bullying have much larger negative associations with adolescent well-being than does technology use. Positive antecedents of well-being are equally illustrative; simple actions such as getting enough sleep and regularly eating breakfast have much more positive associations with well-being than the average impact of technology use.”

“Neutral factors provide perhaps the most useful context in which to judge technology engagement effects: the association of well-being with regularly eating potatoes was nearly as negative as the association with technology use, and wearing glasses was more negatively associated with well-being.”

This study provides a substantial contribution to the conversation of adolescents’ use of technology. While many questions remain unanswered, this study suggests numerous other factors likely play stronger roles in well-being than the use of technology.

Although the current study used innovative methods and drew from a large sample, there are still limitations. The authors caution:

Orben, A., & Przybylski, A. K. (2019). The association between adolescent well-being and digital technology use. Nature Human Behaviour, 1. (Link) 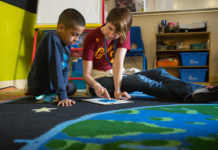