From Indybay: “Over 100 years ago, Freud became aware that many patients had been sexually abused as children, but was forced to abandon this belief due to rejection by his professional peers. I interview author Jeffrey Moussaieff Masson about this still-taboo subject.

Q. With all the attention now being given to sexual assault as a result of the MeToo/TimesUp movements, there is also a growing awareness that the problem is not simply with the perpetrators of these crimes, but also with the people who enable, deny, or cover up the crimes. Based on your investigation into Sigmund Freud’s private letters, do you think that Freud’s body of work needs to be reconsidered in terms of these new perspectives?

JMM: Of course it does. We have to ask how is it possible that psychoanalysts for almost a hundred years denied the reality of incest simply because Freud did. Many of them knew both from their own experiences, and from clinical work, that it was real. Even women analysts went along, though some were themselves victims. Freud had doubts he was right to deny the reality of childhood sexual abuse, but kept his doubts to himself. When I was Project Director of the Freud Archives, and worked at his desk in London, I found a series of letters having to do with child sexual abuse in the top right-hand drawer of his desk. This leads me to believe he was preoccupied with the matter right up to his death in 1939. […]

Q. […] Can you talk about any patients in particular that you feel were abandoned by Freud, because he refused to validate or acknowledge the reality of their experience of abuse? […]

JMM: Of course there is a whole literature about patients who were hurt by Freud because he did not accept their reality. […] Like any therapist, and it is as true today as it was then, Freud was the victim of his own prejudices and his own areas of ignorance.

He insisted on imposing these deficits on his patients, because he believed he was ‘well’ and they were ‘sick,’ so they had to accept his interpretations. This has not changed in one hundred years, and that is why I wrote my book Against Therapy. The most egregious case, in my opinion, is the woman who told Freud she had been savagely raped by her father at age three, and nearly bled to death. Anna Freud refused to publish the letter in which Freud recounts this terrible tale to his friend Fliess. I put it back into the public record.

At the time, it was clear that Freud believed her. In fact he said he knew the father and also knew he was capable of doing such a thing. He then told Fliess, I have a new motto for my new science: Poor Child, what have they done to you? Beautiful words, and Anna Freud crossed them out with a red pencil as not being fit to be seen!” 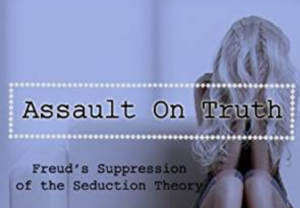