From Yale Environment 360: “How long does it take to get a dose of nature high enough to make people say they feel healthy and have a strong sense of well-being?

In a study of 20,000 people, a team led by Mathew White of the European Centre for Environment & Human Health at the University of Exeter, found that people who spent two hours a week in green spaces — local parks or other natural environments, either all at once or spaced over several visits — were substantially more likely to report good health and psychological well-being than those who don’t. Two hours was a hard boundary: The study, published last June, showed there were no benefits for people who didn’t meet that threshold…

The growing body of research — combined with an intuitive understanding that nature is vital and increased concerns about the exploding use of smart phones and other forms of technology — has led to tipping point at which health experts, researchers, and government officials are now proposing widespread changes aimed at bringing nature into people’s everyday lives.” 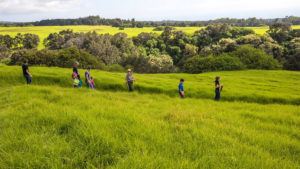