From VICE: “In a popular and public move, the United States’ Federal Drug Administration recently approved intranasal esketamine, one of the components of the psychedelic ketamine, for treatment-resistant depression. The nasal spray costs nearly $900 per dose—or roughly $7,000 for the first month of treatment, and each treatment takes at least two hours in a clinic. (It has yet to be decided how much of the cost insurance plans will cover.)

Esketamine can be unwieldy to use and carries a number of significant potential side effects. Shockingly, it was no better than placebo in two of the three short-term Phase-III studies submitted to the FDA for approval.

But the biggest problem at hand is not the drug itself. It’s the fact that instead of representing a revolution in mental health treatment, as it has been touted to do, esketamine is not a breakthrough at all. It’s just a way for pharmaceutical company Johnson & Johnson to make a significant profit off gullible insurance companies and vulnerable patients.” 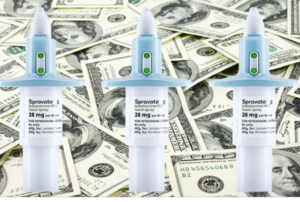