A paper published in the journal New Media and Society highlights the potential for social media and online platforms to support people navigating their experience on psychiatric drugs. Drawing on qualitative data gathered on user activity, authors Ian Tucker and Lewis Goodings explore how one peer-to-peer social media site in the UK, elefriends (http://www.elefriends.org.uk/), serves as a source of collective knowledge for those who take psychiatric medication, helping them manage the uncertain effects that such pills have on their bodies.

Working in collaboration with a UK-based charity, members on elefriends provide direct peer-to-peer support to each other with a focus on issues of long-term psychosocial distress and psychiatric medication. According to Tucker and Goodings:

“Elefriends is used at particular moments of reconfiguration (e.g., change in dosage and/or medication), periods of self-experimentation (when people tailor their regimen by altering prescriptions or ceasing medication) and when dealing with a present bodily concern (showing how members have a direct, immediate relationship with the site).” 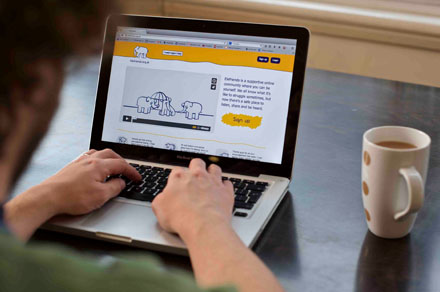 From Facebook’s unapproved “emotional manipulation study” to the now infamous Cambridge Analytica scandal, there are plenty of reasons to be skeptical of the social utility of information technologies. This is particularly true regarding how digital tools have been marketed for mental health purposes. Not only have studies uncovered dubious data collection practices underpinning popular mental health apps, but the FDA approval of new digital pills that track users’ intake presents a range of ethical concerns, despite suggestions by the FDA to the contrary.

Underlying all of these concerns are issues with privacy and the use of digital technology for social surveillance, whereby people’s social networks have become expropriated as sources of capital for transnational organizations.

Similar to other social media sites, users on elefriends can create profiles and share information and images with other users in their network. Unlike corporate platforms like Facebook and Twitter, however, data collected on users is kept to a minimum, and it is never sold to other organizations. As such, the contours of the social networks are as much as possible shaped by the needs and desires of users rather than universal advertisement algorithms.

The authors point specifically to the immediacy of mutual support offered on the elefriends site, which is something that healthcare or counseling services are unable to provide. Being a platform on which individuals with similar lived-experiences can distribute support across a network of users, Elefriends echoes calls for greater user inclusivity and peer-support models that have long been cornerstones of user rights movements.

To help make sense of how social networks via elefriends help users make sense of their medicalized bodies, the authors draw on insights from affect theory, an approach in the social sciences that considers affect and emotion to be primary forces in constructing subjectivity, as well as the philosophy of Henri Bergson, specifically his concept of affection.

As the authors explain, Bersgon understands affection as “the capacity to experience modifications of individual bodies as they come in contact with both themselves and other bodies.” In this sense, bodies continually affect and are affected by other bodies. In this sense, Bergson considered affection to be a core dimension of life that “is ‘closer’ to the body than perceptions.”

At the same time, Bergson maintained a central role for images in the constitution of any given body. This makes his philosophy, despite being over 100 years old, especially useful for making sense of how bodies are affected via the mediation of digital networks. Insofar as bodies are composed of ever-evolving—or, in Bergson’s words, creatively involving—constellations of affects and images, social media sites like elefriends can operate as sites for experimentation between bodies linked materially to each other.

The research was based on data collected from the posts and comments of a total of 157 consenting users, spanning March to June of 2014. The authors used a software package called Wordstat to find specific references to ‘medication’ across the posts and comments, including “abbreviations (e.g. ‘med’, ‘meds’); words that have a similar meaning (e.g. ‘drug’, ‘antidepressant’, ‘treatment’); and the names of specific medications (e.g. ‘Citalopram’, ‘Sertraline’).”

After the data was collected, the authors narrowed in on the following four themes:

Examples of the third and fourth of these themes can be seen in the following extracts (names are pseudonyms created by the authors):

LISA: just laid in bed…tv on..  got like a fluttering feeling inside.. i don’t know if it’s my heart..i don’t know what it is..xxx

LISA: it’s on my left and side ….top of my rib cage…fluttering… so sick of it all. i’m exhausted…and that’s making me cry again..just struggling .xxxxx”

According to the authors of the study, this exchange exhibits how taking psychiatric medication can lead to experiences of ‘somatic uncertainty,’ where each moment yields a complex array of emotions and sensations that exceed what the user (Lisa) can make sense of on her own. This overlaps with Bergson’s theory of affection insofar as he emphasized that ‘affective states are experienced where they occur: that is, at a particular point in my body,’ and in ways that are, again, “closer to the body than perceptions” are (1991{1896}: 57).

While Lisa’s body is the primary instrument she has available to determine how the medication she ingested recently is affecting her, Louise nonetheless serves an essential role in co-constructing the experience. Later on in the conversation, Lisa’s embodied affections are expressed in ways that link communally with her care for others on the site:

“LISA: sat hugging my pillow…wishing my life was so different xx

LISA: i can’t say on here…too triggering…but i want so much for things to change…but i’ve been hurt so badly, i’m struggling to get passed it all…i tried to move forward…i try….in my head i think i’m ready..in my heart, i’m not,i can’t. too painful. too scared. xx”

Such exchanges, the authors suggest, exhibit the unavoidable vulnerability underlying such experiences, as well as the high degree of sensitivity users express regarding each others’ needs. Even in Lisa’s state of intense distress, she is careful to emphasize her great affection for other users on the site, going so far as to prioritize their needs over her own.

And yet, with the continual support provided by Louise, Lisa’s sense of vulnerability is able to expand in ways that are rare in even professional care relationships:

LISA: s/h tonight….not so good. i can’t live like this.

LOUISE: Hope you are ok Lisa, in that you haven’t hurt yourself too much, you must be so tired , has your meds started to take some effect for you? Xx

According to Tucker and Gooding, such passages provide a small glimpse into the power of affective networks when it comes to making sense of experiences that are inherently uncertain and distressful. With the help of Bergson’s concept of affection, the authors were able to “highlight how people’s knowledge of their medicated bodies is mediated by the relation with Elefriends as a technological object.”

Here, embodied affections are amplified through networks of images and messages whereby they become transformed into something beyond mere individual emotions. Via Elefriends, such affections contribute to a growing constellation of collectively expressed knowledge regarding the often frightening and pain-inducing effects of psychiatric medications.

“Elefriends expands the potential to offer peer support in terms of facilitating communication with a large number of people. Trying to project one’s medicated body into the site requires people attuning to their bodies in such a way they can isolate the most pressing somatic concerns needing care. This can happen at particularly significant times (e.g. medication changes), with Elefriends’ continual presence facilitating an immediacy to how people experience and talk about their medicated bodies.”