From The Guardian: “‘Though only one facet of the sprawling opioid industry, Purdue Pharma and the Sackler family were directly responsible for inflicting immeasurable harm on communities around this country. With the guilty plea, the Sacklers lose their name, their company, and substantially more,’ said the lawyers for plaintiffs in the National Prescription Opiate Litigation case.

But Emily Walden, chair of the Fed Up! coalition of families harmed by opioids, said that with Purdue already bankrupt there is little chance of the money being paid to help the victims.

‘I was very glad to hear, finally, the federal government saying that this is a felony and what they did was absolutely wrong. At the same time, they’re already in bankruptcy. What penalty is there? There’s none really,’ said Walden who lost a son to opioids . . .

In recent months, the Sackler family’s representatives have attempted to paint the agreement to pay $3bn as part of a final settlement as evidence of their ‘deep compassion for people who suffer from opioid addiction and abuse’. But they continued to insist that people who became addicted to OxyContin are ‘abusers’ who only have themselves to blame.” 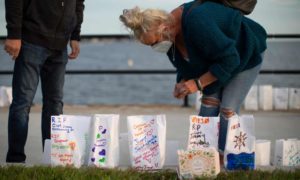