The association’s governing Council of Representatives adopted an apology at its meeting Oct. 29, acknowledging that APA ‘failed in its role leading the discipline of psychology, was complicit in contributing to systemic inequities, and hurt many through racism, racial discrimination, and denigration of communities of color, thereby falling short on its mission to benefit society and improve lives.’

‘APA is profoundly sorry, accepts responsibility for, and owns the actions and inactions of APA itself, the discipline of psychology, and individual psychologists who stood as leaders for the organization and field,’ the apology states.

The resolution, which passed unanimously, acknowledges that ‘the governing body within APA should have apologized to people of color before today. APA, and many in psychology, have long considered such an apology, but failed to accept responsibility.’

The apology credits a broad cross-section of APA’s members, including elected and appointed leaders, for bringing the apology to communities of color to fruition. The effort included soliciting public comments and conducting listening sessions and surveys. The work was spearheaded by the APA Task Force on Strategies to Eradicate Racism, Discrimination, and Hate and its five-member Apology Advisory Subcommittee, composed of eminent psychologists who were chosen for their knowledge and expertise.” 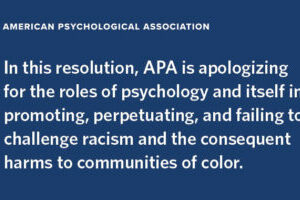