An eye-popping number of people confess to being easily distracted. One international study found that upwards of 62 percent of respondents are usually or always easily distracted. In school settings, students end up paying attention to lecture material about 54 percent of the time and 69 percent of them report texting on occasion, when they ought to be listening to the teacher. While doing homework, some data show students switch between off-task technology usage and attending to their homework, on average, every six minutes.

Rampant distractibility may explain why legions of people are turning toward the practice of mindfulness meditation. Emotional intelligence guru, Daniel Goleman, reviewed the science behind pursuing mindfulness routines and claims one of its few proven benefits is a reduction of distractibility. 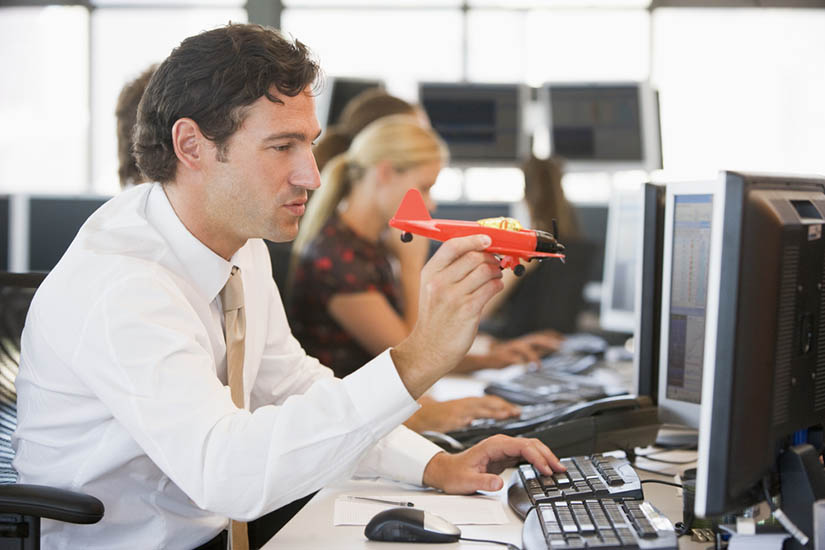 Being easily distracted can cause people to automatically assume they suffer from ADHD, driving rates upwards. Along these lines, data suggest there’s been a 43 percent increase in first-time diagnoses of ADHD among adults in the past decade. According to the Centers for Disease Control and Prevention, in 2003 rates of ADHD in children hovered around 4.4 percent. Nowadays, that number is around 10 percent. What if distractibility is really the brain’s default setting, and we should be thankful when able to experience deep cognitive engrossment and real creative mental “flow?”

It seems we have become so casual about medicalizing and pathologizing off-task states of mind that we have forgotten that the mind often wanders for reasons having to do with boredom and curiosity, not because we were unluckily born with a “grass-hopper” brain. People often seem less threatened by admitting to being easily distracted than easily bored or too curious, probably because the former is thought to reflect an involuntary neuro-cognitive condition you’re afflicted with that gets in the way of wanting to pay attention. However, if what you’re experiencing actually is boredom or curiosity, and it gets improperly neuro-cognitively construed as a “failure in executive functions,” to be medically treated, a person is denied access to what the boredom and curiosity might signal, the deeper self-understanding to be derived that can guide future actions in the direction of actualizing more fulfilling life choices. Let me explain.

From a strict neuro-psychological perspective distractibility occurs when the brain’s executive control system malfunctions and is unable to tune out internal or external stimulation that is irrelevant to what is supposed to occupy a person’s attention. Put bluntly, distractibility is an unintentional breakdown in a person’s cognitive control system. There’s no meaning or purpose involved. Take the case of a teenager who is supposed to be concentrating on driving, though cannot resist checking his or her phone for Instagram alerts. Neuro-cognitively speaking, plain and simple, the teenager’s executive control system has failed to inhibit distracting outside stimulation. Examining any motives or intentions behind the behavior that can be learned from is considered pointless.

However, in situations where mind-wandering occurs for reasons having to do with boredom a person can learn a great deal about him or herself by asking “why” questions about that boredom. That’s because the experience of boredom tells us much about what we find interesting and meaningful, and what we don’t; or, what we view as relevant or irrelevant as far as our preferred interests and life priorities.  When we are bored there’s a sense of feeling trapped, required to do something we find unpleasant. There’s a desire to think about or do something else that promises to be far more satisfying. Therefore, daydreaming, spacing out, or mind-wandering while bored can signal us that there’s a mismatch between what we feel forced to do in the moment and what we would rather be doing. The “distractions” that present themselves—thinking about where to take one’s girlfriend to dinner this weekend; possible plotlines for upcoming House of the Dragon episodes; a faster route to take home on the new electric bike you just bought—are more like “attractions,” more pleasant and relevant thoughts to have than the ones we are supposed to be having.

The classroom is often a breeding ground for boredom. Students have to surrender a great deal of agency in the process of learning material they often have very little genuine interest in. Tuning out, looking off into the distance, while thinking about a Walt Whitman poem that was covered in an English class earlier that morning, instead of persevering in solving the quadratic equation just assigned in their current class can be thought of, not as a pointless distraction, but a moment of boredom-induced mind-wandering potentially telling an 11th grader much about him or herself: “Do I have more of a talent for literature than advanced math?” “Perhaps I’m tuning out on math and tuning into a poem because I hate being told what to do and how fast to do it, with the teacher having so much control and me possessing so little?” “Is thinking about the poem my way of mentally escaping, exercising some freedom from conditions I find oppressive?” “Maybe my mind is on other things because I’m forced to sit through a lecture by an uninspiring teacher and it’s completely taboo to disclose that out loud?” “Am I daydreaming because I find the math problem too challenging and cannot solve it without help from the teacher, which my pride prevents me from doing?” “Am I daydreaming because I find the math problem not challenging enough such that I really should request more difficult work from my teacher, an act she might find off-putting?”  “Perhaps my mind-wandering is a way I’m giving myself a delightful little break before regaining focus on a task I’m not thrilled about?”

In short, mind-wandering can serve the purpose of alleviating boredom while engaged in onerous or monotonous tasks. In that regard, it serves an adaptive function insofar as it enables a person to continue with a task that is experienced as tedious or uninteresting, but still important to complete. It’s the mind’s way of giving itself a short break. However, in classroom learning situations time is a precious commodity and students are confronted with the reality that there’s scant time to take mind-wandering breaks. There’s pressure to lock on and into tasks and complete them in a timely manner. Distractibility then becomes a label to apply to those students who are apt to engage in prolonged mind-wandering and regain focus on the task at hand too late for it to be completed in a timely manner, based on teacher defined efficient time-management protocol.

People who are abundantly curious, on the surface come across as distractible. Recently a client mentioned that his “ADHD was raging out of control.” I asked him to describe this. He spoke of being in the middle of reading an online magazine article on global warming, having clicked on a reference to the manufacturing of electric car batteries—which sent him on an investigatory journey. It took him thirty minutes to regain focus on the article on global warming. I suggested he was not suffering from distractibility, so much as excessive curiosity. Or, that he had a voracious appetite for acquiring knowledge, found so many topics interesting and compelling, as well as personally and socially useful, that he had an attractable mind, not a distractible one. His inquisitive mind pulled him in the direction of alluring topics, tempting him to indulge ideas that were off shoots of the task at hand. It would be more accurate to say he was prone to inconvenient curiosity, or being curious at the wrong time, insofar as staying selectively attentive to the current topic of investigation, thereby maximizing learning and retention of it.

All in all, if we become too enamored with categorizing a susceptibility to respond to task-irrelevant stimuli as distractibility, medicalize it, and hollow out any meaning and purpose associated with why we are mind-wandering, much self-learning can be lost. There may even be a tragic dimension to chronically ignoring what boredom-induced mind-wandering has to tell us about a mis-chosen career, a college major that is a bad fit, a boyfriend that needs to be shown the door. If your mind often wanders off during team meetings at work, while economics lectures are in full swing, or when your boyfriend starts up a conversation, viewing these as pointless distractions can rob you of intuitions that crucial life changes desperately need to be made if you are to have a shot at a more flourishing life.