There are many good books about the crimes in the drug industry and the widespread corruption of the profession to which I belong; doctors. I had therefore promised myself that I would not write one. But two things in particular made me change my mind in the summer of 2012.

In 2007, PhD student Anders Jørgensen and I applied for access to trial protocols and clinical study reports for two slimming pills at the European Medicines Agency (EMA). Our request was flatly denied with the excuse that the documents could not be released because it would undermine commercial interests. We complained to the European ombudsman, and he agreed with us that these documents did not contain commercially confidential information. When, after 3 years, the agency was still completely resistant to our arguments and those of the ombudsman, he accused the EMA of maladministration. This caused the EMA to change its stance completely. Its director left the agency to consult for drug companies, and the new director introduced a far-reaching openness policy in accordance with the ombudsman’s wishes and in accordance with the principles on which the EU are based.

In 2012, I found out that the ten biggest drug companies in the world commit repeated and serious crimes to such a degree that they fulfill the criteria for organised crime under US law. I also found out how huge the consequences of the crimes are. They involve colossal thefts of public monies and they contribute substantially to the fact that our drugs are the third leading cause of death after heart disease and cancer.

I describe many therapeutic areas in my book, Deadly Medicines and Organised Crime: How Big Pharma Has Corrupted Health Care, and have come to the conclusion that psychiatric drugs are the most corrupted one. Psychiatry is the drug industry’s paradise as definitions of psychiatric disorders are vague and easy to manipulate, and as it is so easy to seemingly produce a positive effect, even for drugs that don’t work.

I devote two of the book’s 22 chapters to psychiatry and end the last chapter in this way:

“How come we have allowed drug companies to lie so much, commit habitual crime and kill hundreds of thousands of patients, and yet we do nothing? Why don’t we put those responsible in jail? Why are many people still against allowing citizens to get access to all the raw data from all clinical trials and why are they against scrapping the whole system and only allow publicly employed academics to test drugs in patients, independently of the drug industry?

“I know some excellent psychiatrists who help their patients a lot, e.g; David Healy uses watchful waiting before giving drugs to first-episode patients. I also know that some drugs can be helpful sometimes for some patients. And I am not ‘antipsychiatry’ in any way. But my studies in this area lead me to a very uncomfortable conclusion:

“Our citizens would be far better off if we removed all the psychotropic drugs from the market, as doctors are unable to handle them. It is inescapable that their availability creates more harm than good.”

You can read the second chapter, on psychiatry, on the publisher’s website. 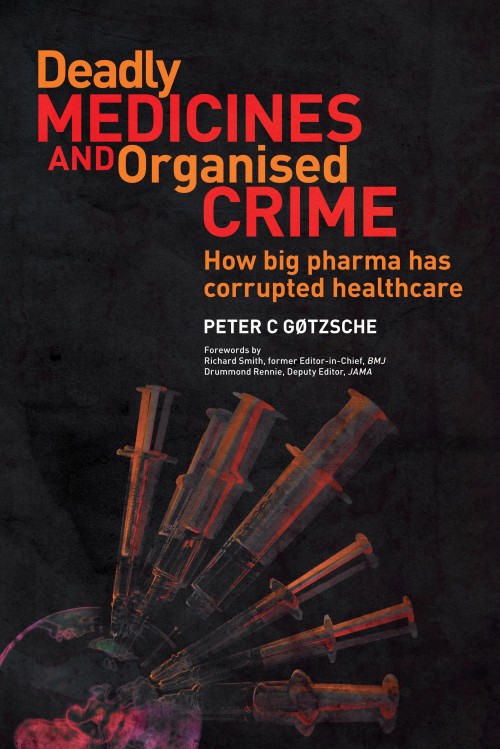 ‘The main reason we take so many drugs is that drug companies don’t sell drugs, they sell lies about drugs. This is what makes drugs so different from anything else in life… Virtually everything we know about drugs is what the companies have chosen to tell us and our doctors… the reason patients trust their medicine is that they extrapolate the trust they have in their doctors into the medicines they prescribe. The patients don’t realise that, although their doctors may know a lot about diseases and human physiology and psychology, they know very, very little about drugs that hasn’t been carefully concocted and dressed up by the drug industry… If you don’t think the system is out of control, then please email me and explain why drugs are the third leading cause of death… If such a hugely lethal epidemic had been caused by a new bacterium or a virus, or even one hundredth of it, we would have done everything we could to get it under control.’​

“Most of Peter’s book is devoted to building up the case that the drug industry has systematically corrupted science to play up the benefits and play down the harms of their drugs.

“As an epidemiologist with very high numerical literacy and a passion for detail, so that he is a world leader in critiquing clinical studies, Peter is here on very solid ground. He joins many others, including former editors of the New England Journal of Medicine, in showing this corruption.

“He shows too how the industry has bought doctors, academics, journals, professional and patient organisations, university departments, journalists, regulators,  and politicians.

“These are the methods of the mob.”