Robert Findling, MD, is a pediatrician and a psychiatrist.  He is the Director of Child and Adolescent Psychiatry at Johns Hopkins Children’s Center, and Vice President of Psychiatric Services and Research at the Kennedy Krieger Institute.

On July 31, Dr. Findling published a brief video (and article) on Medscape:  Adverse Events Caused by a Drug Warning?

Dr. Findling’s article is essentially a commentary on a study by Christine Lu et al, which was published by the BMJ on June 18.  Here is the conclusion paragraph from the Lu et al report:

“Safety warnings about antidepressants and widespread media coverage decreased antidepressant use, and there were simultaneous increases in suicide attempts among young people. It is essential to monitor and reduce possible unintended consequences of FDA warnings and media reporting.”

“It was about spin and PR.  Its purpose was to attack and embarrass the media in order to keep them in line.  The fundamental message in the study, and in the NIH press release, is:  If you reporters print bad things about antidepressants, this will lead to reduced usage of these products, which in turn will lead to more suicides, and you will have blood on your hands!  Psychiatry is intellectually and morally bankrupt.  It has no valid response to its critics and is increasingly resorting to this kind of spin and PR.”

In fact, to their credit, the mainstream media did not pick up the Lu et al study to any marked degree, though the NIH, who funded the study, did issue a very misleading, and at times blatantly false press release.

But, back to Dr. Findling’s article.  Dr. Findling confined his observations to the adolescents (10-17) in the study.  Here are some quotes from his article interspersed with my comments.

This statement is false.  Here’s the passage from Lu et al:

“We estimated a relative reduction of 31.0% in antidepressant use in the second year after the warnings…At the same time as the substantial reduction in antidepressant use, we observed a sharp increase in psychotropic drug poisonings (fig 1). We estimated a significant relative increase of 21.7% in psychotropic drug poisonings in the second year after the warnings…”

The key word in this last quote is “estimated,” which appears twice.

Lu et al did not, as Dr. Findling asserts, find a 31% reduction in the rate of antidepressant prescriptions, nor did they find a 21% increase in the rate of psychotropic drug poisonings.  Rather, Lu et al estimated these numbers.

They graphed antidepressant use and psychotropic drug poisonings for 1.1 million adolescents who were enrolled in a consortium of group insurance plans.  The data was graphed from 2001 (q.1) to 2010 (q 4).  The black box warnings were mandated by the FDA in October 2004.

They extended these trend lines for the second half of the study period, as shown in the diagram below.  The orange dotted lines are the trend line extensions. 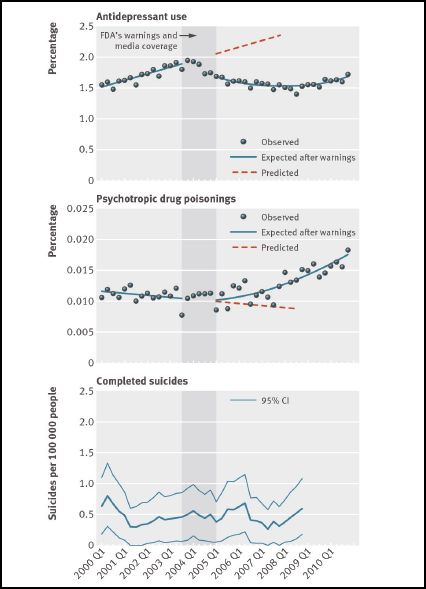 They chose the last quarter of 2006 (i.e. two years after the mandated black box warnings) as a reference point and calculated that at that point, antidepressant use was down 31.0%.  But these changes were not calculated against the actual data at the time of the warnings.  They were calculated against Lu et al’s trend line estimates of what would have been the case in 2006 (q 4) had the data continued to trend in the same direction, and at the same rate.  Here’s Lu et al’s statement on the matter:

“…we also provided absolute and relative differences (with 95% confidence intervals)…in the second year after the warnings (that is, in the last quarter of 2006), which were estimated by comparing the overall changes in outcome attributable to the warnings with counterfactual estimates of what would have happened without the warnings.” [Emphasis added]

In reality these kinds of short-term trend lines are notoriously unreliable, and the notion of assessing a percentage change against what might have been the case is fraught with potential for error.  And incidentally, I’m not familiar with the term “counterfactual,” but Merriam-Webster’s Collegiate Dictionary (2009) gives “contrary to fact” as the definition.  So perhaps Lu et al were trying to tell us something!

What the data, for this particular group of adolescents, actually shows is that antidepressant use did decrease beginning about a year before the black box warnings.  It is likely, but not certain, that this decrease was related to the publicized suicidality concerns, the FDA advisories, and the FDA warnings.  But psychotropic drug poisonings remained relatively flat (with some fluctuations) from the beginning of the study until about the beginning of 2008.  At that point the graph starts to climb.

A critical point here is that one can manipulate trend lines readily by choosing the start and finish points for one’s study period.  There is nothing  in the Lu et al data to support an association (much less a causal link) between the reduction in antidepressant use that started in 2003 (q 4) and the increase in drug poisonings that started about the beginning of 2008.  And even if these two variables were perfectly correlated, in the absence of additional evidence, there would be no reason to believe that the adolescents who didn’t take the antidepressants were the same individuals who were hospitalized for drug poisoning.

Back to Dr. Findling:

“The purpose of the current study was to examine 3 key variables during the second year after the FDA warnings were issued:

• Rate of psychotropic drug poisonings (which can serve as an indicator of suicide attempt rate); and

Despite the cautious wording in the second item, there is a clear implication that psychotropic drug poisonings (ICD-9 code 969) can be used as a substitute, or proxy, measure of suicide attempts.  In my earlier post, I drew attention to the fact that drug poisoning is only one method of committing suicide, and in many cases is not a suicide attempt, but rather an accidental overdose.  I also pointed out that ICD-9 code 969 includes poisonings by caffeine, marijuana, amphetamines, and Ecstasy, overdoses of which are not, to my knowledge, often used as methods of suicide.

Here’s what Lu et al say on this matter:

Reference 34 is to an earlier Lu et al study, on the completeness of deliberate self-harm (E-codes) in commercial insurance plan databases.  So the only reference cited in support of using drug poisonings as a proxy measure for suicide attempts is reference 33.  This is a 2010 paper by Patrick et al.  On July 14, less than a month after the publication of Lu et al, the BMJ published a letter from Catherine Barber, Matthew Miller (two of the authors in Patrick et al) and Deborah Azrael, all of Harvard School of Public Health.  Here’s a quote from their letter.

“Lu et al used poisonings by psychotropics (ICD-9 code 969) as a proxy for suicide attempts in claims data from 11 health plans, in spite of the fact that the code covers both intentional and unintentional poisonings. Our paper, which is the sole reference to their claim that code 969 is a ‘validated’ proxy for suicide attempts, in fact shows that in the U.S. National Inpatient Sample the code has a sensitivity of just 40% (i.e., it misses 60% of discharges coded to intentional self-harm) and a positive predictive value of 67% (i.e., a third of the discharges it captures are not intentional self-harm).”

And, in reference to other studies cited in Barber et al’s letter:

“On balance, the evidence shows no increase in suicidal behavior among young people following the drop in antidepressant prescribing. It is important that we get this right because the safety of young people is at stake. Lu et al’s paper sounding the alarm that [suicide] attempts increased was extensively covered in the media. Their advice that the media should be more circumspect when covering dire warnings about antidepressant prescribing applies as well to their own paper.” [Emphasis added]

So, the very people that Lu et al were citing to support their use of drug poisonings as a proxy measure of suicide attempts, have not only repudiated this methodological decision, but have also cited evidence contradicting Lu et al’s primary finding.

Back to Dr. Findling:

“An accompanying editorial [in the BMJ]…commented that the net effect was that the FDA warning led to more harm.”

This is an accurate reflection of the content of the editorial in question, which was written by John Geddes, Professor of Psychiatry at Oxford University; Andrea Cipriani, Senior Clinical Researcher, also at Oxford Department of Psychiatry; and Rob Horne, Professor of Behavioral Medicine, University College London.  Here’s what they wrote:

“The net effect of the warning was probably counterproductive and led to more harm.”

In fact, for the reasons given above, there is nothing in the Lu et al data to even suggest that the warnings “led to more harm.”

But Geddes et al went on to distort the facts further:

“Completed suicide is such a rare event that even this large observational study lacked the power to investigate this outcome.”

“Our study was the first to examine the effects of the warnings on completed suicides over a long period. In contrast with the increases in suicide attempts, even with large sample sizes we observed no changes in suicides after the warnings. Completed suicides are rare; only one tenth as common as suicide attempts. Nevertheless, our data are consistent with the Centers for Disease Control and Prevention report that showed gradual increases in completed suicides between 1999 and 2010, without sudden discontinuities around the time of the FDA warnings and media reports, among people aged 10-34 years…”

“Completed suicides did not change for any age group.”

And finally, from Dr. Findling:

“The data from this study suggest that adverse events not only can occur from medicines but also as a result of warnings. This leads to the unanswered question: How do we communicate treatment-related outcomes and treatment-related concerns effectively and openly to ensure improved patient outcomes without unwanted consequences?”

In reality, the only significant consequence of the warnings emerging from the Lu et al study pertaining to adolescents (10-17) is a reduction in the use of antidepressant drugs in this particular group.  There is no evidence of an increase in psychotropic drug poisonings, suicide attempts, or completed suicides.

The essential dynamic in all of this is that the FDA’s warnings, which incidentally were long overdue, had a negative impact on pharma-psychiatry’s image, and on their business, but had no negative impact on client welfare.  Nevertheless, psychiatry continues to resist the reality that their sacred drugs do in fact cause harm, and that the FDA warnings were needed.  For psychiatry, business and professional status routinely trump client welfare.

Psychiatry is morally and intellectually bankrupt.  They have never had any intelligent or logical response to the criticisms that are being leveled against them, including the well-established fact that their so-called antidepressant drugs induce suicidal feelings and actions in some people, particularly children and young adults.  They refuse to accept this because it contradicts their dogma.  Instead, they use spin, propaganda, and fear-mongering to promote their drugs.

Dr. Findling, according to his Johns Hopkins bio,

“…has been honored with numerous awards and has received both national and international recognition as a clinical investigator.”

And  yet, he apparently couldn’t see the flaws in the Lu et al study, even though these flaws have been widely publicized.  This is indeed puzzling, but becomes clearer as one continues with his bio: