My wife once came with me on a Saturday morning visit to a psychiatric hospital. I was collecting data for my PhD, and she met me in the car park of a large psychiatric hospital after I’d conducted my interviews.  As I drove away, she stroked the back of my hand and suggested that I could relax my knuckle-whitening grip on the steering wheel. I really didn’t like leaving the residents behind. I wanted to rescue them.

In mental health, resolving the relative contributions of our biology and genetics and how these interact with social and environmental factors (our parenting, peer-relationships, learning, and experiences of both abuse and nurturing) is more than an intellectual puzzle. I’m occasionally annoyed by what appears to be a rather simplistic suggestion that, if there’s a biological, even heritable, element, to a psychological phenomenon, then we’re inevitably discussing an illness, a disease.

Of course there are biological elements to every behaviour, thought emotion, or human trait, since they all involve our brains (we don’t, despite the jokes, think using any other organ and we do, despite the jokes, always use our brain when we’re thinking). But our attitudes to these issues also have direct personal implications. As a mental health professional, as a some-time user of mental health services and (like most of us) as someone with family members with more serious mental health problems, it’s certainly personal for me.

I’ve spent much of my professional life studying psychological aspects of mental health problems. Inevitably, this has also meant discussing the role of biology. I hope I’ve made some progress in understanding these issues, in working out how the two relate to each other, and the implications for services. That’s my academic day-job. But it’s not just academic for me. I’m probably not untypical of most people reading this; I can see clear examples of how my experiences may have affected my own mental health, but I can also see reasons to suspect biological, heritable, traits. As in all aspects of human behaviour, both nature and nurture are involved and they have been intimately entwined in a complex interactive dance throughout my childhood and adult life.

I need to be cautious, because I don’t want to say anything that will irritate my siblings, but I do think there were oddities in my upbringing. My parents had very strong religious beliefs, and I think it’s fair to say that, in addition, there was a degree of emotional repression and our family relationships were somewhat complicated. Just one example: my parents’ belief system included the need to love God more than anything or anyone else, including one’s children. So, after my mother’s death, we discovered that, when she had confessed to a religious mentor that she was in danger of loving her children more than God, there was a subsequent process of re-adjustment … she was encouraged to practice loving her children less. My parents rejected the material world as merely a stepping-stone to heaven (or hell) and paid little attention to worldly pursuits. I remember opening a letter from Cambridge University confirming an offer of a place as an undergraduate. I told my mother, whose reply was; “Very nice dear, now, do you want baked beans on toast for breakfast?” Pride was a very worldly emotion. I guess that experiences like that must have had an effect on me and my siblings.

So much for my upbringing. But like all of us, I was also born with a particular brain. I’ve been educated to observe signs of neurological as well as psychological functioning (if those two concepts can be separated). And one of my close relatives has had major mental health problems throughout his (and therefore my) life. So it’s intriguing to observe similarities between us and speculate on their origin. Do we behave similarly because of our shared upbringing, our shared genetic heritage or (of course) both?

So I am emotionally labile; my self-esteem and emotions are very fragile and very much dependent on what I imagine other people are thinking. Or, at least, I think I am; my observations of my own behaviour are themselves subjective, and it’s possible that others do these things as much as I do. I frighten myself (given my relative’s experiences) by fantasising about … winning Nobel prizes, winning Pulitzer prizes, being elected to this and that, being awarded knighthoods … and that’s frightening because I’ve seen self-referent fantasies ruin other people’s lives. My selective attention is terrible and I find it difficult to avoid distractions. Those who know me well will know that I work with the BBC rolling news constantly running in the background, and I frequently play games while on the phone. I appear to have problems with face-recognition; I find it almost impossible even to recognise the faces of people whom I know well.

And when in conversation with people (in what seems to me to be a potentially related phenomenon), I find it difficult maintain eye-contact, and look to the side to line-up images in the distance. And, perhaps most saliently, I lurch forwards and jump to conclusions in my mental logic. So, if you give me the sequence “A, B, C” and ask me to complete the sequence, I’ll say Z. Maybe that’s a bit of a joke (a pun on ‘complete’), and it’s unequivocally good for me in my academic career. A creative professor is a good professor. I also and simultaneously make abstract and surreal connections. It’s a recognised part of my teaching style – I’ll veer off on a tangent. Again, perhaps useful in an academic and possibly engaging or at least entertaining for students (if they can keep up…). But jumping to conclusions, tangential connectivity and abstract, ‘clang’ associations all have very interesting connotations in the field of mental health.

My tentative conclusions, as of today, are these: First, my childhood had at least as many oddities and peculiarities as would capture the attention of any competent psychotherapist. Second, I believe that my professional eye has identified interesting phenotypes in my close family that reflect potentially heritable traits. Third, these traits may well put me at risk of many emotional problems. Incidentally, they may well also make me absolute hell to live with, and I must give credit to those who have given that a go. Fourth, the interactions of these heritable and environmental factors in my development have also created a person – me – that I value and respect. That’s a very odd, solipsistic, thing to say, but it’s important.

Which leads to my fifth and most important conclusion. For some people, such as for my relative, these interactions cause problems. For others, like me, a presumably very similar pattern of interactions has observable similarities but different outcomes. Of course we need to consider the contribution of biological as well as environmental factors in our psychological makeup. I think it’s perfectly possible to be intelligent and open-minded about the contribution of genetic and environmental factors in our mental health. We can intelligently and respectfully discuss how experiences and heritable traits can interact to produce the wonderful variety of human experience. This, I think, is a much more accurate and helpful way to conceptualise what’s going on than to say that some of us – but only some of us – have ‘mental illnesses’. Labels such as ‘schizophrenia’ not only suffer from the validity problems that we’ve discussed elsewhere [URL], but also obfuscate these important considerations. I don’t think it’s helpful to consider how I have managed to avoid developing ‘schizophrenia’, or whether I have ‘attenuated psychosis syndrome’. To do that, to reduce these discussions to binary considerations of the presence or absence of disorders, necessarily constrains the scientific debate.  It can also sometimes have frightening consequences in the real world. When I’ve mentioned some of these issues before in less public settings, friends and colleagues have often told me that I’m being brave, and that it’s a potentially risky topic of conversation. So why might that be?

The Eradication of Undesirable Genetic Traits

Part of the reason that people might be reluctant to talk about such issues is that we have a very poor track record in this area. This is a difficult topic, but I think it is important to remember the infamous 1933 Nazi Law for the Prevention of Genetically Diseased Offspring (Gesetz zur Verhütung erbkranken Nachwuchses). Arguments of genetic science not only led to the drafting of this law (which permitted the compulsory sterilisation of any citizens who were judged to possess a ‘genetic disorder’ which could be passed onto their children) but indeed led German-American psychiatrist Franz Kallmann to argue that such a policy of sterilisation should be extended to the relatives of people with mental health problems (in order to eradicate the genes supposedly responsible). The notorious Action T4 ‘eradication’ programme was the logical extension of these policies. 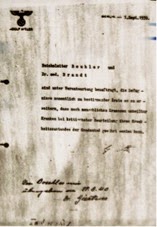 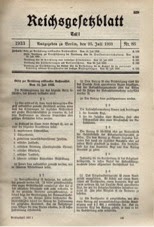 [Note: on the left, the Reich Law Gazette on 25 July 1933: Law for the Prevention of Genetically Diseased Offspring; on the right, Adolf Hitler’s order for the Action T4 programme.]

Of course, a focus on biological aspects of mental health problems is not in any sense necessarily synonymous with fascism. But for many of us, there are echoes of blame, of stigma, when we identify the pathology within the genetic substrate of the person. I’m reminded of Eric Pickles’ notorious throw-away comment to a voter campaigning about the abuse she’d experienced that she should “adjust her medication.” If the pathology lies in the person, and particularly if it is a biological problem, we can dismiss any further troubling considerations.

So one way to understand these kinds of experiences is to diagnose some form of ‘subclinical’ syndrome, perhaps attenuated psychosis. If the Nazis had won the second world war, I would have been castrated as a first-degree relative of a ‘schizophrenic’. Disease-model, eugenic, thinking is a direct threat to me personally, especially given the recent rise of UKIP and other far-right parties in Europe. I am interested in whether the traits that make me a good professor may also be related to the traits I listed earlier, and on their impact on my emotions. I am interested in whether they may have emerged from a similar mix of genes and environment that led my relative to experience psychosis. I am very interested in the practical implications; I have always, for example, avoided certain classes of street drugs. It is absolutely possible to discuss gene × environment interactions, but – please – don’t use the ‘disease-model’ as a framework.

Acknowledgement: Thanks to Anne Cooke for helpful comments and advice on earlier drafts.