Duncan Double, on his Critical Psychiatry blog, published a series of posts exploring the effects of antipsychotics on brain volume and the contention that these changes are tied to ‘schizophrenia.’ “The cerebral atrophy demonstrated by Johnstone et al (1976) was almost certainly due to antipsychotic medication, at least mainly, and was not an indication that schizophrenia is a brain disease.” he writes. “Johnstone et al were wanting to make out that schizophrenia led to a dementing illness, as they found a significant association of increased ventricular size with measures of cognitive impairment. But any cognitive impairment in schizophrenia is functional not organic, so the whole basis of the paper was flawed. And, its misinterpretation has misled a whole generation of psychiatric researchers.” 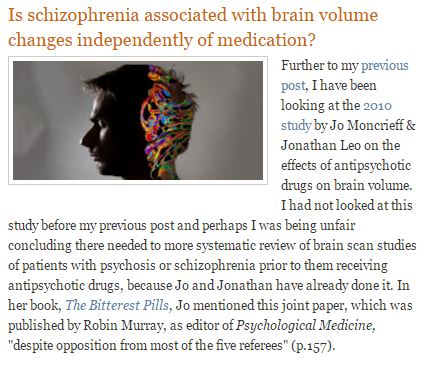