Large brain imaging studies are analyzed by averaging the brain volumes of thousands of participants. However, a new study demonstrates that these findings may not apply to everyone. The research, led by Kaja Z. LeWinn at the University of California, finds that if demographic factors are accounted for, the studies show vastly different results. The researchers call this biased sampling, and it pervades the brain imaging research.

Much of the research in this field is conducted on participants who are White city-dwellers, who are well-educated, and who have a high socioeconomic status. LeWinn and her colleagues suggest that future studies need to include a sample that is more representative of the US population. 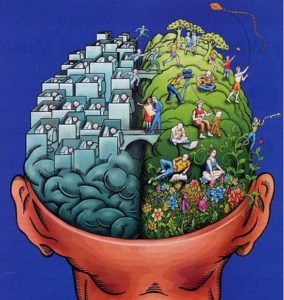 According to LeWinn, “To date, there are no neuroimaging studies based on a representative sample of the U.S. population.” Because of this lack, conclusions about brain development may not be valid for people whose demographics are not represented in the current research.

LeWinn’s study was published online this month in Nature Communications. The findings suggest that childhood brain development occurs differently and at different ages depending on environmental factors.

According to the authors, “Our findings empirically demonstrate observable impacts of sample composition on cognitive neuroscience findings, even for questions about fundamental processes such as age-related change in neural structure.”

That is, many people assume that brain development throughout childhood follows a known, universal pattern. However, this study demonstrates that demographic factors may substantially alter the pattern of “normal” brain development.

LeWinn and the other researchers performed the two analyses to demonstrate that demographic factors have an impact on the results from brain imaging studies. They analyzed data from a large, publicly available collection of well-conducted brain imaging results (called the PING dataset). The sample used by the authors contains 1,162 children ranging in age from 3 to 18. Although the participants were from a variety of racial and socioeconomic backgrounds, the sample did not accurately represent the US population. Specifically, the dataset includes far more Hispanic and multi-racial participants, and wealthier, more educated families, than the general US population.

In both analyses, the authors determined average brain volumes at different ages (for both the whole brain and for specific areas) and used an algorithm to fit a curved line to the data. The difference is that in the second analysis, the authors weighted the sample so that it was more representative of the US population. That is, they increased the amount that White, poor, and less educated Americans would factor into the data.

The standard analysis of the data found that, on average, brain volume increases slightly at young ages, then begins decreasing slightly before decreasing at a greater rate around age 9. However, the weighted data resulted in a very different shape. On average, brain volume began higher and had a much steeper initial climb to an earlier peak (before age 6), then a very steep decrease.

So which of the two reveals the “normal” development of the brain? To which should we compare our children’s brains?

The authors write that they are unable to answer that question. Their purpose, they write, was to demonstrate that “average” brain development looks very different when demographic factors are included. The authors suggest that the stresses of poverty account for much of the difference: normal brain development for children in such situations may peak earlier, and certain brain regions may develop before others. For instance, the development of the amygdala (the brain region associated with emotional processing) over time looks very different in this new analysis: