Up until now I have primarily worked with animal studies, investigating what animal research could teach us about harm from exposure to psychiatric drugs.

I have learned three things from working with animal studies:

Despite these challenges to animal research, we found that mammals exposed to psychiatric drugs do suffer from long-term harms. The mammals showed impaired sexual behavior (antidepressants, primarily SSRIs), impaired locomotion (neuroleptics), impaired cognition, learning and memory (neuroleptics), depression (SSRIs), and impaired fertility (ADHD drugs). The findings from the three systematic reviews that we undertook are discussed in more detail below.

We wanted to investigate harms from exposure to different categories of psychiatric drugs in mammals. The methods we used were inspired by the Cochrane Handbook and a risk of bias tool for animal studies. We based our systematic reviews on controlled studies, as described in the predefined protocols.

Our main criteria were that all mammals must be treatment-naïve and no behaviour or trait must be primed by operation, genetic modifications or other drug treatments.

A short summary of each systematic review is presented here.

Long-term changes in observed behaviour after exposure to psychiatric drugs

We wanted to investigate long-term harms from exposure to any approved psychiatric drugs with a subsequent drug-free follow-up period of at least 90 days (link) to find out if differences between the intervention and control groups persisted after end of exposure.

We included 33 studies: 16 studies used antidepressants, nine used neuroleptics, six used benzodiazepines and two used ADHD drugs. Despite the fact that 27 studies tested more than one drug (but only one drug per animal), this is a small number of studies on long-term harms. This is clearly an area highly under-researched. Fifteen of the 33 studies subjected the animals to more than one behavioural test.

Twenty-seven of the 33 studies were undertaken with rats, whereas the rest used monkeys, hamsters, cats or mice. For the 27 included studies the median treatment length was 14 days (range 6-365 days) and the median drug-free follow-up period was 150 days (range 90-365 days). In nine studies the intervention was prenatal. We found that animal research is highly heterogeneous and thus challenging to combine and that the studies did not resemble the clinical situation as the intervention period was short.

No studies investigated outcomes related to pain or aggression. There were no differences in sleep patterns (three studies from the same research group) or addiction (one study). The outcome dimension anxiety comprised 25 different outcomes measured in eight different tests with a variety of drugs — therefore no firm conclusion could be made based on these results that varied both in favour of the control and the intervention groups. Our findings generally showed harms to be persistent for social (including sexual) behaviour; movements; cognition, memory and learning; and depression.

We found that the animals lost interest in sexual activities when previously exposed to antidepressants, just as was concluded from the findings in another review from our group (link, see the short summary below). We saw that the six outcomes for sexual behaviour were in favour of the control group, and for number of mounts and mount latency significantly so.

For depression the results were diverse. However, when looking at SSRIs only (three studies) the results for immobility as a measure of human anhedonic behaviour were significantly in favour of the control group. 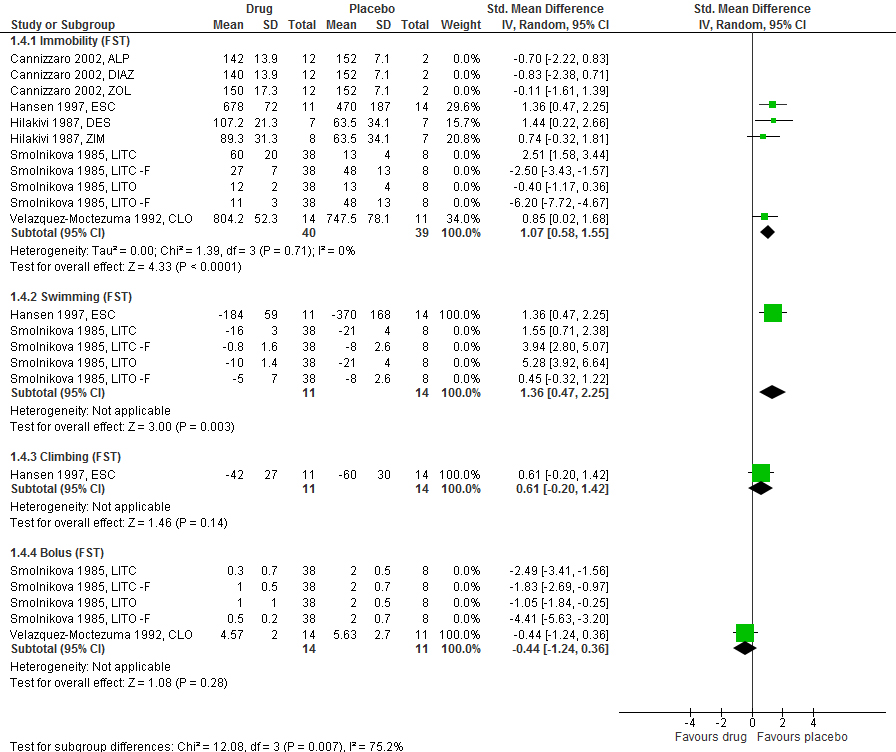 We included 14 studies, published between 2006 to 2013, which assessed whether the use of SSRIs can lead to persistent sexual dysfunction after a drug-free period of any length (link). Four studies used prenatal intervention; all studies were with rodents.

In conclusion, exposure to SSRIs showed substantial and lasting effects on sexual behaviour in rodents and these effects were not reversible after a drug-free period.

We investigated whether mammals treated with ADHD drugs suffer from impaired fertility. For seven studies with clonidine, a drug also approved for migraines and elevated blood pressure, the rats that actually showed an interest in mating were not capable of impregnating the females due to no ejaculation or sterile sperm.

For nine studies with methylphenidate, the most used drug for treating ADHD symptoms, we found that female rats had delayed vaginal patency and the number of estrous cycles was halved. Fertility was also impaired in treated male mice, counted as number of embryos in untreated female mice. There were no differences when measuring number of stillborns or offspring or exterior malformations. However, interior malformations of the skeleton were seen. Generally the differences between groups diminished when the treatment started later in life or when a drug-free period was applied after treatment but before assessment of outcomes.

For one study with amphetamine there were no differences between groups for number of ejaculations and ejaculation latency.

In conclusion, exposure to ADHD drugs may impair fertility in rodents, but the impairment is somewhat reversible after a drug-free period.

The heterogeneity of the studies was high; there were many differences between studies when choosing animals and strains, housing conditions, choice of drug, treatment length and route of administration of the drug, and there were highly varying test conditions even when measuring the same type of behaviour, e.g. anxiety. Number of animals per group was often low, which does not ensure sufficient power to conclude from the statistical analyses.

The quality of the studies was generally poor or poorly reported:

Selective reporting of outcomes mentioned in the methods section was present, but to a smaller extent. Often, nonsignificant outcomes data were not shared. Declarations of conflicts of interest and information about funding were lacking. Few studies reported on drop-outs, deaths or adverse events.

The majority of studies were described as placebo-controlled. A placebo-controlled study usually implies blinding of the observers, but this information was only given in detail for a few studies. No studies mentioned whether the caregivers and other personnel involved with the study were blinded. In animal studies, the caregiver and the observer are sometimes the same person, which means that the use of a placebo has not necessarily led to blinding of either of them, since there could be differences in, for example, the colour of the food, animal behaviour or animal size.

In animal studies it is important to randomize in three different ways (link). First, you have to randomize the animals to either the intervention or the control group to ensure that you do not introduce a bias, e.g. from litter effects.

Secondly, you should apply randomized housing. For example, rats and other rodents are very sensible to light and temperature. If all the intervention rats are placed in the top boxes of the racks there will be a temperature and light difference compared to the control animals in the boxes at the bottom. And these differences introduce a bias in the study, as they cause altered behaviour or altered hormonal regulation.

Lastly, to further minimize bias the researchers should apply random outcome assessment, because animals (just like humans) experience diurnal variation. Therefore, if assessing the intervention animals first (before lunch) and the control animals later, a systematic error will be introduced. For all three systematic reviews, no studies described having used all three ways of randomization and very few described having used two or even just one.

The neglect of considering bias reduction generally causes overestimates of effect and underestimates of harms (link). Therefore it is of utmost importance for future animal research that they are better designed.

Another bias to consider is publication bias. Two of our mentioned reviews have been published, but the third one has not been accepted for publication despite submission to several journals.

Within the last two years, we submitted the paper to four different journals that accept systematic reviews and animal research (Journal of Risk and Safety in Medicine, PLoS Biology, PLoS One, Psychopharmacology) and resubmitted it to PLoS One. The reasons given for declining the paper were that it was out of scope, did not add anything new, too few studies, the quality of the studies was too poor, and we did not divide the studies according to the mechanism of action of the drugs.

It is not our fault that the animal studies were of poor quality and it definitely has merit to publish our review, as it could help in the planning of better future studies of potentially great value to humans.

Despite the studies’ shortcomings, we found that there are important findings in our work: psychiatric drugs do cause long-term impairment and harms.

The ARRIVE guidelines were introduced in 2010 to improve the poor quality of reporting for animal studies, but we found that even after 2010, the studies continued to be poorly designed and published.

We cannot dismiss the available preclinical studies in psychiatry entirely, despite poor quality in methodology and reporting. To advocate for better studies, systematic reviews are needed. By increasing focus on the risks of systematic errors and on selective reporting, animal research in psychiatry could improve in accuracy and transparency.

Since animal research is the foundation for moving on to clinical trials despite its poor quality, it is likely that this leads to many superfluous trials in humans based on false hopes and thus causes an unjust approval of trials. This of course happens at a huge economic expense for the funder, but also leaves a risk of serious and non-serious adverse events for the participants in the trials and subsequently the patients. If the harms of psychiatric drugs were better known from preclinical studies, less money and resources might be wasted on the development of new drugs.

Regulatory agencies are also relevant stakeholders, as they work to ensure high quality of the treatments available to the citizens. Regulatory agency employees should be educated to incorporate the ARRIVE guidelines into their daily work with the scientific literature. We believe that with increased rigour in animal research, the number of false leads will decrease.

In order to improve on animal research and its translational value we advise the following actions be taken:

• We need to assess why the studies are methodologically weak and poorly reported and why this is accepted by the field in the first place.

• All parties involved with animal research, researchers, funding bodies, peer reviewers, journal editors, and also research ethics committees and regulatory agencies, should take action to ensure that it becomes mandatory to adhere to the ARRIVE guidelines. For changes to happen, a special educational program should be set up in each country that educates students, researchers, research ethics committees and regulatory agencies.

• We should set up a trial register for animal studies — like for human trials — to improve all areas of animal research. The trial register should hold information about ethics approval processes and protocol information, thus creating more open and transparent research.