From Big Think: The X-Files, a popular TV show from the 1990’s, explores the philosophy of science, delving into questions about what constitutes quality science. While one main character is prone to Scientism, i.e. applying the tools of science to situations where they are not useful, the other is prone to pseudoscientific thought.

“While Scully can over depend on the scientific view of the world, Mulder is often too keen to jump into a belief without support, or to be open to using a paranormal tool that cannot be relied on. Asking a psychic for an astrological explanation, or trusting the data on a tape given to him by a stranger.

Karl Popper, Austrian-British philosopher extraordinaire, wrote on the philosophy of science for most of his life. True science, he claims, is the creation of ideas when can be proven false and then trying to do so. Any idea which cannot be proven wrong isn’t science. He pointed out that ideas that were seen as very scientific, such as Freudian psychology or Marxist views of history, were impossible to prove wrong. Mulder, while generally reliant on evidence, often accepts explanations that cannot possibly be proven false; making him, in Popper’s eyes, a pseudoscientist.” 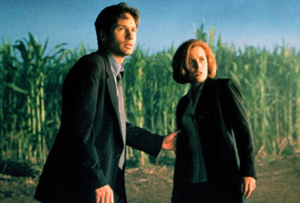