From The Michigan Daily: Netflix’s new documentary “Take Your Pills” examines the historical, cultural, social, and systemic factors that have shaped the ever-increasing rates of Adderall use in the U.S.

“The way the documentary tells the history of the drug since the 1930s is great, producing some of the best moments in the film as a whole. It provides an interesting perspective into the pharmaceutical boom of the second half of the 20th century, using amphetamine, the drug that would become modern Adderall, as an example of how alarmingly ready American society was to adopt a prescription practice without a second thought. The anecdote of school children being fed the drug by their administrators to increase docility in particular is interesting in its contrast to how the situation would be viewed today. The idea of children being given medication by their teacher without first going through a parent would be unbelievable in this day and age, yet, in the 21st century, the use of the drug is only increasing.

“‘Take Your Pills’ chalks this up to what they call the ‘arms race of human capital’ — a dressed up moniker used to describe the pressures placed on kids from a young age to do whatever it takes to knock out the competition and reach their potential, much of the artillery in this arms race coming in the form of things like a GPA or the SAT. All of this falls into one of their driving questions toward the end of the documentary, essentially asking what the world would lose if it became completely saturated by Adderall use. An interesting question — one that it seems the filmmakers believe soon might have to be answered.” 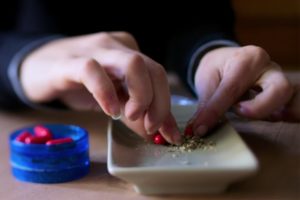