From The Atlantic: “The protracted attempt to usher psychiatry into medicine’s modern era is the subject of Anne Harrington’s Mind Fixers: Psychiatry’s Troubled Search for the Biology of Mental Illness. As her subtitle indicates, this is not a story of steady progress. Rather, it’s a tale of promising roads that turned out to be dead ends, of treatments that seemed miraculous in their day but barbaric in retrospect, of public-health policies that were born in hope but destined for disaster. […]

At the risk of being polemical, let me suggest that Harrington’s word disingenuous fails to describe the cynicism of Robert Spitzer, the editor of the DSM-3, who acknowledged to me that he was responding to the fact that ‘psychiatry was regarded as bogus,’ and who told me that the book was a success because it ‘looks very scientific. If you open it up, it looks like they must know something.’ Nor does ironic accurately describe the actions of an industry that touts its products’ power to cure biochemical imbalances that it no longer believes are the culprit. Plain bad faith is what’s on display, sometimes of outrageous proportion. And like all bad faith, it serves more than one master: not only the wish to help people, but also the wish to preserve and increase power and profits.” 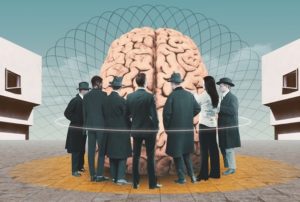