A group of researchers led by Michael P. Hengartner, a senior researcher in psychology at the Zurich University of Applied Sciences, recently published an article in Frontiers in Psychiatry investigating the relationship between antidepressant use and rehospitalization for at a pair of psychiatric hospitals. The authors found that antidepressant users were hospitalized at a higher rate than similar patients who did not take the drugs and that they stayed in the hospital for longer upon readmission. Antidepressants, the authors conclude, may negatively impact recovery through more and more prolonged psychiatric hospitalizations.

“Our data suggest that antidepressant use during acute inpatient care, compared to non-use, may increase the risk and duration of subsequent rehospitalizations over a 12-month follow-up in patients with both primarily affective and non-affective disorders,” write the authors.

“Our findings, therefore, challenge the alleged long-term benefit of antidepressants and raise the possibility, that, in the long run, antidepressants may possibly do more harm than good.”

There has been a continual increase in antidepressant prescription over the last 30 years, a rise that has not correlated with the fall of the global prevalence of anxiety and depression, which has remained stable. Disability from affective disorders, meanwhile, has increased, leading many to question the benefits of antidepressant pharmacotherapy.

First, the authors suggest, these trials include only individuals who responded to acute drug treatment, thereby ignoring those who spontaneously recover or do not respond to drugs. Second, the control group, the group switched suddenly to placebo, consists of individuals who will naturally experience withdrawal symptoms from discontinuing the medication.

Withdrawal symptoms may be misdiagnosed as depressive relapse, or may themselves cause a deterioration into depression. Finally, antidepressants alter neurobiological function in a way such that receptor density is decreased due to increased neurotransmitter concentration. This may cause emotional and psychosomatic issues after long-term antidepressant usage that are iatrogenic in nature, owing to the drug-related neurobiological adaptations.

Other studies still note that only five percent of continuously drug-treated subjects showed sustained remission, that antidepressants may not improve remission rates, or that antidepressants did not differ from placebo but were significantly worse than psychotherapy in improving functional impairment, depression symptoms, and suicidality.

Many trials such do not have unmedicated control groups or contain unrepresentative samples; while this gap is filled by a variety of naturalistic observational studies that suggest the efficacy of antidepressant use in people with affective disorders is limited, observational studies receive empirically unfounded criticism from psychiatry experts regarding selection bias and other such claims.

The authors built their current study on the idea that antidepressant usage has shown, at times, a negative relationship with depression outcomes, and the authors posited that there might be a relationship between using antidepressants after discharge and being re-hospitalized. To investigate this, they matched 45 antidepressant users and 45 non-users from two psychiatric hospitals in Zurich, matching the pairs on a variety of clinical outcomes including illness severity, functional deficit, and psychosocial impairment.

The current study aimed to expand past research by broadening the sample past patients with depression, as well as focusing their analyses on objective, unbiased outcomes such as hospitalization records. To do this, the authors drew data from a study designed to test the outcome of a case management intervention at two Swiss psychiatric hospitals. Participants were assessed while in inpatient care, as well as at three and 12 months after discharge. The primary outcomes for the study were frequency and length of readmissions to psychiatric hospitals, as well as antidepressant use, and socio-demographic variables.

The results were striking: the authors found that antidepressant use during acute inpatient care led to a 350% increased risk of rehospitalization and a 250% increase in days rehospitalized.

“Our findings even raise the possibility that antidepressant pharmacotherapy may increase relapse rates and impair recovery in the long run,” write the authors.

“These findings are in accord with a comprehensive meta-analysis of long-term clinical trials… and conflict with the results from discontinuation trials, which aim at estimating long- term relapse prevention in continuously drug-treated patients compared to patients whose medication was discontinued rapidly and replaced by placebo.”

There are several strengths of the study, including that it is prospective, controls for selection bias and has unbiased outcomes. However, there are weaknesses as well, including lack of causality owing to the groups not being randomized, potential unmeasured confounds, a modest propensity match at n=90, unknown reasons for rehospitalization and not having information on how long antidepressants were used after hospital discharge.

“These potential mechanisms are tentative and still inconclusive, but they provide an important avenue for future research into the long-term effects of antidepressants.” 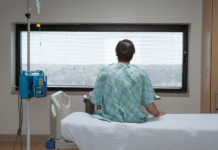