From The Seattle Times: “For Jason and other patients who check in voluntarily, the revelation that they can’t leave when they want to has shaken their faith in a system they turned to for help. The reasons for holding such patients vary, but the practice of doing so — sometimes for days — is a regular occurrence at some of Washington state’s private psychiatric hospitals, an investigation by The Seattle Times has found.

The question of discharging patients from a psychiatric hospital is exceedingly fraught. Doctors are only supposed to admit patients with serious mental-health conditions, and have to balance patients’ right to leave against concerns about their welfare. Washington is one of just a few states where patients who check in to a hospital must be ‘released immediately’ upon their request, with no additional time for observation, according to state law. Yet many patients don’t realize that even if they check in voluntarily, a hospital can legally hold them against their will.

To do so, a hospital physician or nurse has to conclude that the patient poses an immediate danger and then initiate involuntary-commitment proceedings. In Washington state, this begins with a call to county government, which then sends a mental-health professional to evaluate the patient. The county evaluator can involuntarily commit patients for up to 72 hours before patients can make their case to a judge.

Fairfax, the state’s largest private psychiatric hospital, with 157 beds, routinely has held patients by claiming they wouldn’t be safe if released, only to be contradicted by government evaluators who find no grounds for committing them. At Smokey Point Behavioral Hospital in Snohomish County, nurses were told to notify the hospital’s chief executive any time a patient asked to leave early, internal records show, and several patients have complained that staff delayed their release or tried to intimidate them into staying.” 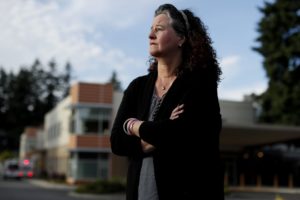