From ISPS-US: “In this talk, Robert Whitaker reviews the science that calls for a radical change or evidence-based paradigm shift in psychiatric care, and describes pilot projects that tell of a new way.

Starting in the 1980s, our society organized its thinking and systems of care around a ‘disease model’ narrative that was promoted by the American Psychiatric Association and the pharmaceutical industry. That narrative has collapsed . . . the diagnoses in the DSM have not been validated as discrete illnesses; the burden of ‘mental illness’ in our society has risen; and there is an increasing body of evidence that tells of how psychiatric drugs, over the long-term, increase the chronicity of psychiatric disorders.

The collapse of that paradigm provides an opportunity for radical change. In Norway, the health ministry has ordered that ‘medication-free’ treatment be made available to psychiatric patients in hospital settings. A private hospital in Norway has opened that seeks to help chronic patients taper from their psychiatric drugs, or to be treated without the use of such drugs. In Israel, a number of ‘Soteria’ houses have sprung up, which provide residential treatment to psychotic patients and minimize the use of antipsychotics in such settings. Research into Hearing Voices Networks is providing evidence of their ‘efficacy’ for helping people recover. Open Dialogue treatment, which was developed in northern Finland and involved minimizing use of antipsychotics, is being adopted in many settings in the United States and abroad.” 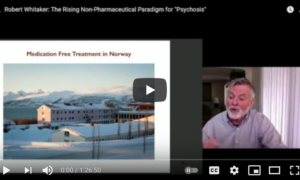