Psychiatry includes a rich history of writings by patients who offer their personal accounts of psychotic states and brutal treatments, often coercively administered to bring disturbing symptoms under control. In the Psychopathology course that I regularly taught at my university, I would include in the syllabus memoirs written by patients, from the classic A Mind that Found Itself (1908) by Clifford Beers, The Bell Jar (1963) by Sylvia Plath, to Girl Interrupted (1993) by Susanna Kaysen.

Virginia Woolf’s novels provided many passages of acerbic feminist commentary as well. My students were invited to unpack this passage from Mrs. Dalloway where Woolf describes her attending physician after one of her emotional breakdowns: “Dr. Holmes came again. Large, fresh coloured, handsome, flicking his boots, looking in the glass, he brushed it all aside—headaches, sleeplessness, fears, dreams—nerve symptoms and nothing more, he said.”

The psychiatric patient genre, from the works of literary giants to everyday patients, tends toward the tragic, even as recent decades have produced a frenzy of upbeat stories on quieting madness through modern chemistry. 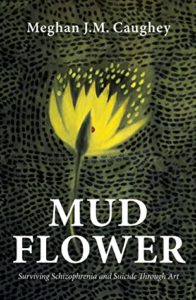 In her memoir, Mud Flower: Surviving Schizophrenia and Suicide Through Art (2021), Meghan Caughey, artist, poet, educator, and peer counselor, seeks a path outside of the established subgenres of psychiatric memoirs—stories that could be loosely assigned to the categories of the tragic, the romantic, and the triumphant. Caughey weaves threads of each of these emotive motifs into her memoir. But the fabric of her work exceeds any simple motif or subgenre.

In describing shifting vantage points on her own malady, Caughey notes: “Mental illness is intriguing if it is in the abstract or at a reasonable distance. I used to try to convince myself and others that being mad was a romantic experience.” Rejecting the romantic tradition of madness associated with poets and writers, Caughey nonetheless brings to the reader enchanting insights.

The title of the book enlists the image of the lotus flower in Buddhist thought—a plant that grows in muddy water and whose exquisite petals find root in sludgy places. In many Eastern traditions, the lotus flower symbolizes paradoxes in human life—how valued attributes such as creativity, beauty, and love hold a kinship with opposing states such as chaos, ugliness, and rage.

As a practicing Buddhist, Caughey draws on the rich fecundity of the image to advance a philosophy of madness as states associated with muddy currents. For Caughey, schizophrenia produces experiences perpetually teetering between chaos and creativity. Like the Buddhist symbol of the lotus, Caughey finds pathways of enlightenment through her own disordered states of mind.

The author opens each chapter with one of her poems and a painting or drawing to accompany entries from years prior to publication—2018, 2019, and 2020—much like journal entries. Each chapter then turns to a period of time, beginning with the 1970s as she enters college and suffers her first psychiatric crisis. The aesthetic choices she makes in structuring the book serve as recurring reminders to the reader: the author is an artist, a poet, and a person who, as Walt Whitman poetically quipped, “contains multitudes.”

More than the diagnosis of schizophrenia and its troubling legacy as a damning disorder, the memoir speaks to the process of having to incorporate a mental disability into a sense of self while creating space for a multitude of potentialities. The title of the book, Mud Flower, grew from the fertile soil and hard rock of her lived experiences.

Suicide is also part of the title and implicitly links her struggle with schizophrenia with a death drive. Caughey brings the torments of psychosis into understandings of suicidality, and of the many reasons why people think about killing themselves. Caughey sheds light on a neglected area of the mental health literature on suicide—how psychotic states can produce an almost unbearable load of sensations, disturbing imagery, and tormenting commands. She describes hearing voices shouting persecutory orders, “you should die,” drowning out the gentler but less audible voices.

For much of her life, Mud Flower attests, the author’s identity has been vitally grounded in her work as an artist. She has produced an array of arrestingly bold and distinctive pieces, many of which have been displayed in gallery shows. Drawings and paintings project massive strength and fragility, spherical bulges and receded spaces, forms that are both dynamic and still.

Caughey traces her history as an artist to an art therapy program in a state hospital where she was confined as a young woman.

Like most artists and writers, she draws on her own life experiences. But it’s important to recognize as well the difference between the expressive value of art therapy in treatment settings and the sustained accomplishments of an artist. Caughey grants both positions a formative place in her development and emotional survival. She casts her identity as an artist through her psychiatric history while simultaneously claiming her place as a recognized artist.

Indeed, one endearing passage unfolds around a scene where she shows her paintings to her mother with her expressed child-like desire for parental recognition. As her mother turns away from the unsettling images on the canvas, Caughey announces that someone is paying thousands of dollars for one of those paintings. It’s an assertion of the power of the capitalist market as well in deciding questions of value.

The specific conventions of the memoir do impose demands for making personal history both intelligible and interesting to the reader. Caughey writes about episodes in her life in exquisite detail, for example in her vivid description of the “reparenting” inpatient programs in the early 1970s for people diagnosed with schizophrenia—and her own enchantment and subsequent disenchantment with this unorthodox treatment. The book is absorbing and reads like a novel in its strong narrator voice, as well as passages that reflect the author’s visual acuity and skills as an artist. The language is direct and observational in tone but never dry.

Though diagnostic criteria have changed over the decades, including in recognizing multiple sub-types and overlap with other disorders, schizophrenia has throughout the history of psychiatry been understood as a condition characterized by impaired affective responses as well as disordered thinking.

Caughey captures some of these elements of schizophrenia, most poignantly in passages on her periods of social isolation, numbing withdrawal, and suicide attempts. But she also narratively subverts oppressive stereotypes of people suffering from schizophrenia as anhedonic and asocial. Conversations with people, as well as communions with nature and her dogs, animate the book in lively ways.

In the object relations tradition of psychoanalysis, the inner world is understood to be constituted by representations of people or parts of people, and psychosis is thought to characterize a state where the person is not able to hold in mind stable representations of self and other. However, Caughey’s memoir is a highly relational story—one where friends, lovers, family, teachers, as well as her beloved dogs—inhabit her psychic spaces.

A recurring touchstone motif centers on her friendship with a psychiatrist, Maggie, who enters the story as a person who is there for her during periods of crisis but also a source of deep camaraderie. There is a sense of palpable mutuality in this friendship—places where people provide a kind of holding for one another and where creative work flourishes through the meeting of minds.

Surprisingly perhaps, the diagnosis of schizophrenia—a focus of ongoing theoretical controversy and taxonomic revisions in psychiatry—claims very little space in her memoir. After a breakdown and hospitalization in college, she is first assigned what she understood early on as a damning diagnosis. “I was doomed,” she recalls.

Rather than debunking the diagnosis or offering much in the way of commentary, Caughey seeks to challenge the dark pessimism that continues to adhere to this disorder. She offers a nuanced critique of the medical model, primarily through her experiences with hospitalizations and psychoactive drugs. Initially refusing to take antipsychotics, she goes on to describe a complex and mixed history around the role of medications in the treatment of her mental illness.

She offers vivid descriptions of treatments and what she terms the “schizophrenia drugs”—and her early soul-deadening experiences with the “Thorazine shuffle.” But Caughey adheres to a pragmatic philosophy, where people find their way to whatever works for them. For instance, she shares the story of being part of a clinical trial for a drug that proved to be beneficial and her decision to do a promotional video for the pharmaceutical company that distributed the drug.

Working in the field of peer support and counseling, Caughey is comfortable with practical advice for those similarly afflicted. “We expect the worst. Everyone expects the worst for us. Everything we see and hear confirms the worst…” In reflecting on a radio interview for Mental Health Awareness Week, Caughey goes on to explain, “I will talk to anyone listening who has been given a diagnosis. I will say, just give it up—not that it will go away or be any less valid, but your diagnosis will lose its grip on your life, and once you no longer define your experience with this label, then you can start to live a new, happier life.”

Caughey encourages readers to give up their own prejudices as well, and their readiness to place people diagnosed with schizophrenia among the damned.

There are many crevices in the paths Meghan Caughey charts forward for herself and others, many carved by the limits imposed by the dominant society. The author neither endorses the childhood trauma theory of schizophrenia—a theory that was largely displaced by the massive expansion of anti-psychotic drugs in the 1960s—nor does she adhere fully to the medical model.

Although the subtitle suggests an offer of guidance, Mud Flower is no self-help book. Rather, the author seeks an ethics centered on the valuation of madness—and on art as one communicative pathway for values—for the muddy waters readily discarded by the dominant society.

Mud Flower is a satisfying read whether one suffers a serious mental condition or not. The book is a wonderful example of excellent writing in the tradition of the psychiatric memoir in speaking to aspects of mind and consciousness that go beyond any diagnosis. It’s a call for facing more directly the place of mental suffering and the admixture of pain and joy that are part of the human condition.