From The Revelator: “As dozens of major wildfires burn across the American West, Siberia and other parts of the globe, we spoke with study coauthor Micah Hahn, an assistant professor of environmental health in University of Alaska Anchorage’s Institute for Circumpolar Health Studies, about why there’s much more that communities can do than just prepare physically for wildfires in their communities.

. . . What were some of the top things you heard from people in your study?

One of the things people talked about was feeling trapped. They were feeling closed in and having feelings of isolation or claustrophobia. For some that was from the smoke, but for those that were in Kenai, there’s basically one road through there that accesses all of those communities. And when the wildfire was right next to the road and was even jumping it at times, that caused huge issues with traffic control and whether people were allowed to evacuate or not evacuate.

Many people were feeling really pinned in — like they couldn’t go anywhere.

They also felt prolonged stress. This fire was going on all summer. It was over three months long. And even people who weren’t stressed at the beginning were really stressed by the end.

Something else we heard a lot about was grief after the fire was over [because of the change in the forest] . . . If you drove down to this area and you saw what the landscape looked like afterwards, it was like black toothpicks. If this was something that a person saw from their house every day or was an area where they spent a lot of time with their family and they have memories from that region, it was really sad.

Many people wondered whether it would ever look the same again. We heard a lot about feelings of loss and helplessness.

Another thing folks talked about was what they were calling ‘returning ghosts.’ I won’t label it PTSD, but it’s a similar idea. The feeling that we’ve done this before. We have a lot of natural disasters in Alaska — wildfires, earthquakes, tsunamis. And so people were just dealing with the reoccurrence of [trauma] and the uncertainty of all this, and being worried about what might be coming down the road.” 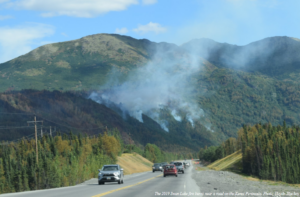