A new study in Molecular Psychiatry explores the effects of antidepressant drugs on serotonin transporter (SERT) occupancy. The findings support the use of hyperbolic tapering during withdrawal—decreasing the dose to a very small amount before entirely discontinuing. They also challenge the notion of increasing the dose if the drug doesn’t work.

The research was led by Anders Sørensen at the Nordic Cochrane Center and included Henricus G. Ruhé and Klaus Munkholm. Their analysis used data from 17 different brain imaging studies of the effects of SSRI, SNRI, and serotonin modulator drugs. They looked at the percentage of the serotonin neurotransmitter receptors (SERT) blocked by the drugs at different doses. According to the researchers:

“SERT occupancy increased with a higher dose in a hyperbolic relationship, with occupancy increasing rapidly at lower doses and reaching a plateau at approximately 80% at the usual minimum recommended dose.”

This has two implications. The first is that even at the minimum recommended dose (below the normal prescribed dose), the drugs’ effects on the serotonin system have plateaued (occupying about 80% of SERT). Thus, there is minimal biological benefit to increasing the dose, even when the drug is at the minimum recommended level. This means that if antidepressant effects were driven by neurochemistry, lower doses should provide about the same benefit as higher ones—so there would be little benefit to increasing the dose, even if the drug doesn’t seem to work.

“The hyperbolic dose-occupancy relationship may provide mechanistic insight of relevance to the limited clinical benefit of dose-escalation in antidepressant treatment and the potential emergence of withdrawal symptoms.”

The second implication of the study is that at low doses, even very small shifts in the dose have a large impact on serotonin levels. Thus, a small dose increase while at a low dose can make a huge difference, while even large increases once already at a high dose don’t have much of an impact.

And the same goes for tapering off the medication—a large decrease from a high dose will have little effect on actual serotonin levels. But once the dose becomes smaller, even tiny dose adjustments can have outsized effects on serotonin levels.

The chart below for fluoxetine (Prozac) is the quintessential example. The steep increase in serotonin receptor (SERT) occupancy at low doses begins to level off at about 5 mg (about 65% occupancy). The dotted vertical line at 20 mg represents the minimum recommended dose. The chart demonstrates that even half that dose, 10 mg, occupies almost the same percentage (a little over 70%) of serotonin receptors as 20 mg (a little less than 80%)—so it should have about the same biological effect. Higher doses make even less of a difference, with 60 mg occupying less than 5% more SERT than 20 mg. 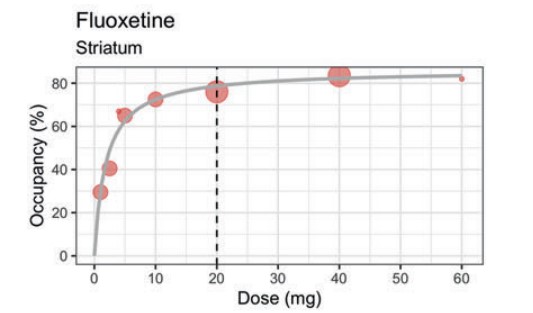 This hyperbolic relationship with SERT occupancy also explains why studies have found that tapering to smaller and smaller doses over months before eventually discontinuing the drug may be necessary in order to minimize withdrawal effects. (The researchers write that “approximately half of the patients stopping or reducing the dose of antidepressants experience withdrawal symptoms, which, among others, may include flu-like symptoms, anxiety, emotional lability, lowering of mood, and irritability.”)

Another surprising finding was that there was no relationship between serotonin receptor occupancy and clinical effect.

The authors write, “the studies included in the present review that measured the relationship between clinical effect and SERT occupancy did not find significant correlations.”

That is, the percentage of serotonin receptors blocked by the drugs had no correlation with whether people’s depression improved. This further challenges the long-debunked chemical imbalance myth.

Finally, the researchers also note that the evidence on this topic is limited and that methodological problems plague the research literature.

“The evidence is limited by non-transparent reporting, lack of standardized methods, small sample sizes, and short treatment duration. Future studies should standardize the imaging and reporting procedures, measure occupancy at lower antidepressant doses, and investigate the moderators of the dose-occupancy relationship.”

Response to Criticism of Our Serotonin Paper