In a new article published in Child and Adolescent Mental Health, Laelia Benoit and her colleagues examine newspaper narratives around ecological action and anxiety among young people and their parents.

Taken together, the researchers argue that these narratives depend on ignoring children’s views and downplaying their concerns to present stories that their adult readers won’t ignore due to anxiety and guilt. The current research argues that existential psychology offers useful insights into how we may face anxiety, guilt, and despair around climate change, allowing for more productive responses from adults. They write:

“Child and adolescent mental health care providers should be aware of the lay media’s narratives regarding children’s reactions to ecological challenges, and to support parents to avoid the trap of childism.” 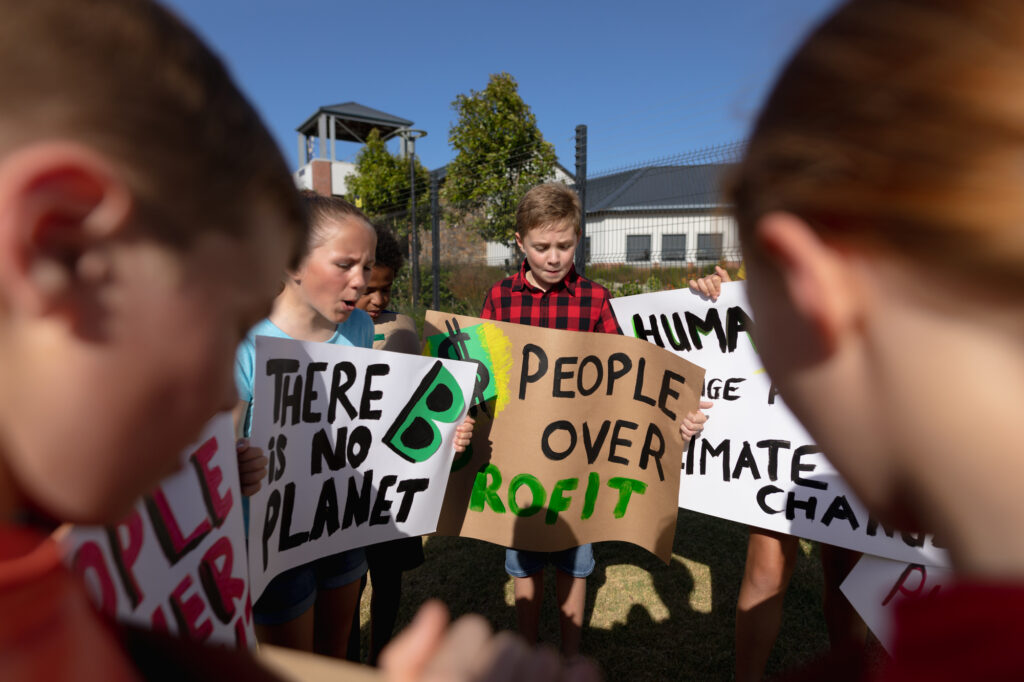 Recent research has found that climate change negatively impacts mental health by disrupting social, economic, and physical systems. A shift in average temperatures from below 30 degrees celsius to above 30 would likely produce 2 million additional instances of mental health difficulties. With new research into epigenetics uncovering how our environment impacts our genes, some researchers believe that the climate crises will negatively influence our mental health and change our genes.

People in areas impacted by climate crises experience elevated levels of anxiety, depression, and post-traumatic stress disorder. Climate change also likely increases deaths by suicide, with researchers estimating the number of additional suicides to increase by .7 percent in the United States and 2.1 percent in Mexico due to a 1 degree Celsius increase in average temperatures.

Researchers have also pointed to the power imbalance between “elites” and average people in messaging about climate change. Unequal distributions of power allow well-resourced interests to block climate action by using their resources to influence beliefs around climate change. When the youth see climate action being blocked, they respond with increased climate anxiety and pervasive distrust in government.

Research has also found that experiencing the kind of stress that childism promoting newspaper narratives allows us to ignore may lead to more positive action on environmental issues.

The current research examines narratives in newspapers around climate change. The researchers looked specifically at how young people and adults are positioned differently by these narratives.

Newspapers tend to position young people as demanding activists, adultified minors, innocent victims, or ultimate saviors. “Demanding activists” headlines highlighted the actions of youth during the climate strike of 2019, with many young people missing school to participate in the marches. The authors also point to headlines depicting the youth as juggling the realities of living in a pandemic and attending school online with taking action on climate change.

“Adultified minors” narratives appear in the form of youth taking up the responsibilities of adults in relation to climate change. According to the authors, in this narrative, the youths take on the role of reproachful adults, explaining that they are upset, getting angrier, and warning that adults will eventually face the consequences of their inaction on climate change.

“Innocent victim” narratives cast young people as doomed to suffer the consequences of climate change that they had little hand in causing. Lastly, the “ultimate savior” narrative positions the youth as the group that will ultimately solve the climate crisis, imploring adults to do what they can to help the youth fill these oversized shoes.

Many newspaper articles position parents as truly coming to terms with the climate crisis through their parenthood. With the birth of their children, these parents come to grips with the immediacy of the problem. In addition, these articles explain that looking towards our children’s future tends to make the climate crisis more visceral. Many articles also focused on advice for talking to children about climate change and how to tame their anxiety by focusing on action.

Narratives criticizing youth-led activism were common, with many basing criticisms of climate activism on the age of the participants. These articles argued that a movement led by teenagers could not be taken seriously and that young people lacked the mental capacity to understand climate change.

Lastly, the authors point to the narrative of transcendence, with climate action giving adults an opportunity for personal growth, societal change, and spirituality. This narrative contains many of the existential themes the authors believe could be useful for positive action from adults on climate change. These articles focused on acknowledging the harm we have caused and taking responsibility, understanding our lives within the larger scale of the world around us, and being empathic towards future generations.

While many of the themes around the youth and climate activism may cast young people in a positive light, the current research argues that ultimately they function to pass the responsibility for dealing with climate change from adults to young people. Taken together, the authors believe the narratives present in newspapers promote childism. Essentially, we pawn off the responsibility of dealing with climate change to young people that we then do not take seriously.

“Existential psychology can in turn help confront difficult truths, process distressing feelings, and take ownership. Adults have to accept some lingering anxiety for how their active or passive stance may have impacted the planet’s health. However, through their actions, parents and adults can also help empower youth by taking action, and in doing so, modeling engaged and global citizenship that their children can emulate in order to feel less powerless, hopeless, and worried about the ‘perilous times’ that may lie ahead.”

The researchers note several limitations to the current study. First, this research omitted television and social media sources and relied exclusively on U.S.-based newspapers, making generalization to other populations dubious. The people interviewed for these articles were likely especially interested in climate change. Print media likely underrepresents the attitudes of uninterested youth.

Benoit, L., Thomas, I., & Martin, A. (2021). Review: Ecological awareness, anxiety, and actions among youth and their parents – a qualitative study of newspaper narratives. Child and Adolescent Mental Health. https://doi.org/10.1111/camh.12514 (Link)

How Western Psychology Can Rip Indigenous Families Apart: An Interview with Elisa Lacerda-Vandenborn