From Salon: “So if a chemical imbalance may not be the cause of depression, what is? For decades, numerous researchers and public intellectuals have noted the substantial  evidence that depression and other mental illness are linked to capitalism, the dominant economic system in the Western World — and one which governs the way we relate to each other, our selves, and our hopes and dreams. Oliver James, a psychologist who authored the 2008 book ‘The Selfish Capitalist: Origins of Affluenza,’ argued that the materialistic, self-obsessed and competitive culture of neoliberal capitalist societies instill ’emotional distress’ in their populations. Some of his evidence comes from the impressive rise in SSRI prescriptions in western countries, which far outpace population growth.

Likewise, the late Mark Fisher, a cultural critic and philosopher, argued in a 2011 essay, ‘The Privatization of Stress,’ that precarious economic circumstances engendered by the inequality innate to capitalist economies generate depression and anxiety.

He gave an example from an interviewee, an underemployed man named Ivor who was relying on short-term temp contracts to eke out a living, and who went on a trip to the grocery store and missed a call from an employment agency offering him work for the day. When Ivor returned home, Fisher writes, the contract was already filled.

‘Such laborers are expected to be waiting outside the metaphorical factory gates with their boots on, every morning without fail,’ Fisher said. ‘It is hardly surprising that people who live in such conditions — where their hours and pay can always be increased or decreased, and their terms of employment are extremely tenuous — should experience anxiety, depression and hopelessness. And it may at first seem remarkable that so many workers have been persuaded to accept such deteriorating conditions as “natural,” and to look inward — into their brain chemistry or into their personal history – for the sources of any stress they may be feeling.’

Mikkel Krause Frantzen, author of ‘Going Nowhere, Slow: The Aesthetics and Politics of Depression,’ has described depression as ‘collective’ and political problem. In a 2019 essay in Los Angeles Review of Books, Frantzen describes how many people are understandably depressed by the sad state of real-life events and politics — such as looming existential crises like climate change, and the way that neoliberal capitalism forecloses the possibility of any alternative future. In Frantzen’s narrative, these sad situations are very rightfully inducing depression; Frantzen borrows a term, ‘depressive realism,’ to describe the relatable depression one might feel from observing the state of the world.

If the ‘chemical imbalance’ hypothesis is further undermined by future studies, it suggests that the cause of depression may indeed be political — as writers like Fisher have theorized for decades — and related to the social conditions engendered by capitalism and modernity, rather than mis-aligned brain chemistry.” 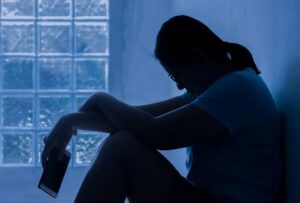