From the Daily Mail: “A leading panel of doctors has recommended all American children over the age of eight to be screened for anxiety – even if they do not have symptoms.

The US Preventative Services Task Force (USPSTF), one of the most influential bodies in American health care, issued the new guidelines on Tuesday. It also is pushing for doctors to screen all children over the age of 12 for depression no matter their reported symptoms.

The group believes cases are going undiagnosed because of a shortage in physicians and a spike in mental health problems following the pandemic. Just last month the same panel recommended that all adults aged 18 to 65 receive a screening for both conditions. If doctors were to follow the recommendations of the task force it would involve checking at least 200 million Americans.

. . . The independent panel, while highly respected, holds no enforcement power and physicians are under no requirement to follow their guidance.

The Centers for Disease Control and Prevention (CDC) reports that eight per cent of children aged three to 17 years old suffers from an anxiety disorder. And a report from Yale University indicates around 3 per cent of under-18s has depression. Rates are believed to have surged during the pandemic, where disruptions to everyday life and limited social interactions harmed many younger people. ‘The Task Force cares deeply about the mental health of all children and adolescents,’ said Dr Lori Pbert, a psychologist from the University of Massachusetts.

. . . Experts told DailyMail.com the new recommendations could spur a surge in prescriptions for anti-anxiety medication. Some fear these highly addictive drugs are already at the center of a budding addiction crisis in the US.

Dr Anna Lembke, chief of the Addiction Medicine Dual Diagnosis Clinic at Stanford University, told DailyMail.com: ‘In the United States when the Joint Commission mandated that all doctors screen all patients for pain, even when patients did not come in for pain complaints or demonstrate physical stigmata of being in pain, the result was increased opioid prescribing, contributing to our current opioid epidemic.

‘I could see something similar happening with mandated screening of anxiety.'” 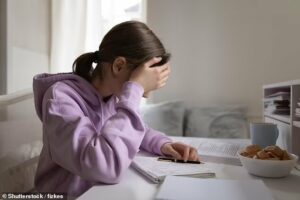