From The New York Times: “Mayor Eric Adams announced a major push on Tuesday to remove people with severe, untreated ‘mental illness’ from the city’s streets and subways.

Mr. Adams, who has made clearing homeless encampments a priority since taking office in January, said the effort would require involuntarily ‘hospitalizing’ people who were a danger to themselves, even if they posed no risk of harm to others, arguing the city had a ‘moral obligation’ to ‘help’ them.

‘The common misunderstanding persists that we cannot provide involuntary “assistance” unless the person is violent,’ Mr. Adams said in an address at City Hall. ‘Going forward, we will make every effort to “assist” those who are suffering from “mental illness.”’

The mayor’s announcement comes at a heated moment in the national debate about rising crime and the role of the police, especially in dealing with people who are already in fragile mental health. Republicans, as well as tough-on-crime Democrats like Mr. Adams, a former police captain, have argued that growing disorder calls for more aggressive measures. Left-leaning advocates and officials who dominate New York politics say that deploying the police as auxiliary social workers may do more harm than good.

. . . The policy immediately raised questions about who, exactly, would be swept up in it, and some advocates for people with ‘mental illness’ warned it could face legal challenges.

. . . The effort will also involve an increase in the use of Kendra’s Law, which lets courts mandate outpatient ‘treatment’ for those who are a danger to themselves or others and which was expanded by Albany lawmakers in April.

. . . Several advocates for people with ‘mental illness’ said that the mayor’s plan went too far and would prove counterproductive.

‘The mayor talked about a “trauma-informed approach,” but coercion is itself traumatic,’ said Harvey Rosenthal, chief executive of the New York Association of Psychiatric Rehabilitation Services and a longstanding critic of involuntary confinement.

He said that the mayor’s approach relied on ‘the same failed system that’s overburdened and can’t address the people they already have now.’” 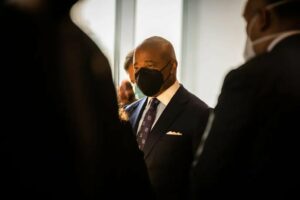