From Harvard Divinity Bulletin: “The collateral damage from mainstreaming mindfulness can serve as a cautionary tale for psychedelic medicalization: important wisdom is lost when technologies of transcendence are stripped from their spiritual and religious contexts and presented as psychological treatments. Meditation, once a practice of a very select group of virtuoso monks in Buddhist cultures, is now a wellness program offered by schools, prisons, hospitals, and corporate America. Psychedelics are no longer just visionary tools of shamans or sacraments guarded by complex rituals; they are on the way to becoming medical interventions. People will be harmed. How many, how, and why, we don’t yet know, in part because so few are given voice to share their stories, and little research exists.

Psychedelic science does an odd dance with the spiritual. On the one hand, studies (mostly out of Johns Hopkins University) have popularized the notion that a mystical-type experience leads to better therapeutic outcomes. This frame reduces transcendence to its therapeutic potential—a breathtakingly transactional posture to the divine that creates a sort of tautology whereby the mystical is therapeutic because the therapeutic is mystical. This is most evident in the narrow definition used in the Mystical Experience Questionnaire (MEQ): to qualify for a ‘complete mystical experience,’ one must report a concurrent ‘positive mood.’

No wonder a recent popular book about psychedelics posited that the divine is simply a cosmic surgeon who, through psychedelics, ‘cuts out anxiety and depression.’ This is like calling a knife a surgical instrument, without acknowledging it can also kill.11 Or, to use a different surgical metaphor, as one recent Multidisciplinary Association for Psychedelic Studies MDMA trial participant put it during a podcast interview: ‘In the trial it’s like they did open heart surgery . . . they fixed what was wrong with my heart but they left my chest wide open.’12

William James insisted on keeping a value-neutral stance on mystical states, arguing that they include pleasure and pain, darkness and light. And the therapeutic instrumentalization of transcendence ignores volumes of wisdom from traditions that emphasize the dangers of nonordinary experience. The full archive of mystical experience demonstrates that seeking to know God, truth, reality—going beyond—can terrify, maim, even kill.

In my own tradition, Buddhist meditation has long been understood by practitioners as dangerous. Many are familiar with ‘Zen sickness,’ popularized by the eighteenth-century monk Hakuin Zenji who experienced extreme, persistent somatic and physiological distress from sitting zazen. But the understanding of the perils of meditation is much more wide reaching. Recent translations of early Chan texts reveal how the otherwise highly praised meditations on the impurity of the body can lead to suicide, and even introductory meditation can disturb the body’s ‘winds.’13 In short, meditation has been understood—especially in the history of Zen—as a high-risk, high-reward activity. All of the earliest Jewish hekhalot literature of traveling to the upper realms in Judaism is about avoiding danger. In the old Talmudic tale of Pardes, four rabbis encounter God. One becomes a heretic, one goes crazy, one drops dead, and the final—the only one!—returns home with his faith affirmed. In the famous chapter 11 of the Bhagavad Gita, Arjuna sees the universal form of Krishna, but he taps out. It’s just too much.

Some things threaten to overwhelm, tearing at the seams of our senses. They are not ours to safely know.” 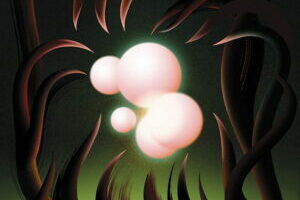