Necessity is the Mother of Invention. Our community needed an Iatrogenic Illness Awareness Month, so we created one.

Iatrogenic damage is defined as a state of ill health or adverse effect resulting from medical treatment. As many MIA readers know, it is the third leading cause of death in the United States after heart disease and cancer. We chose October for our month as it aligned with Mad in America’s International Film Festival this year, and I couldn’t think of anything spookier than an epidemic being swept under the rug. We began discussing the details of a profile picture campaign in my online support group for psychotropic survivors. We decided to tell our collective story with a simple image stating: “Your drug may be your problem, mine was.” Some may recognize this as a play off of the book, Your Drug May Be Your Problem, by Dr. Peter Breggin and David Cohen, PhD. 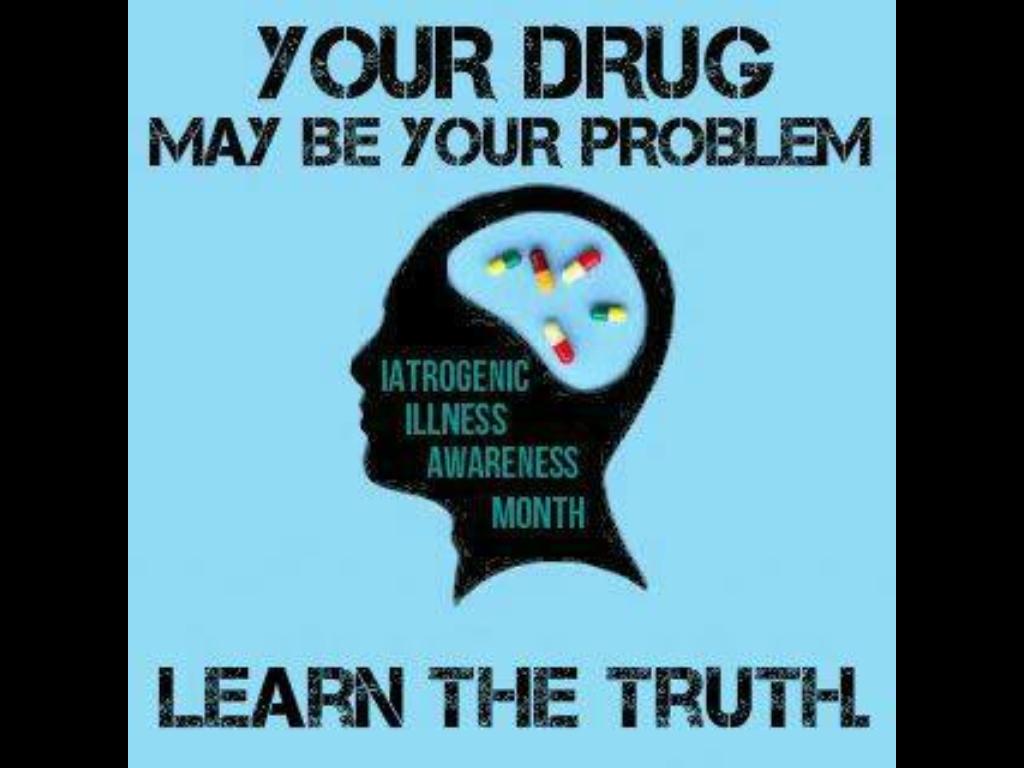 Our main reason for beginning an awareness month is the need for recognition– a yearning to make the word “iatrogenic” and its corresponding language available to our community, and to the greater public as a household name. We don’t have the luxury of raising money for research, racing for the cure, or ribbons. For that we would have to be on the map. Why is it that something this pervasive gets so little traction?

I think it’s because sufferers are made or told to keep quiet, whether it’s from internalized fear or felt bigotry and discrimination. Regardless, when we are safe to do so, I believe that we must come out.

“Let me give you some free advice [the “advice” was no where near free…] Once a benzodiazepine is no longer in the body, there is no way for it to cause any harm. These drugs have half-lives, you know?”

In a way he was technically right. The drug wasn’t in my body anymore at twelve months off when I sought his help and guidance in my darkest hour. I was no longer “withdrawing” from anything. At that point I was healing from neuropsychiatric drug damage. This is just one example of many in which sufferers from iatrogenic illness are turned away from thevery practice that caused their illness and are left with nothing–no guidance about the future or help with disability, just a stack of generalizations about the ways in which our supposed inherent “mental illness” is contributing to our pain.

That same psychiatrist went on to tell me that my symptoms could be early signs of schizophrenia. This man was not willing to engage in conversation about the culpability of his industry or the fallibility of an imperfect drug, but he was perfectly willing to hand me a new label and drug me into oblivion. There is no end to the list of things wrong with that.

Along with countless other people, I have been left relatively alone with this illness. Since November 2012, I’ve been forced to discover my illness, research it, educate and convince loved ones, find support, educate the public on YouTube (to the best of my ability), combat online-bullying and stigma, and attempt to survive with an invisible illness that society will not recognize. Don’t get me started on the carnage this creates for families, and the subsequent agonizing guilt attached to being a person with an “impossible” illness. I have seen my story online like a ghost story, being retold over and over with different names and places, but always the same underlying crux: psychotropic drug damage. For myself and others, protracted withdrawal syndrome has not been as much of an illness as it has been a haunting–a barbaric suffering that has been described as the inability to feel one’s own soul.

This illness has taken almost everything that once made me feel human and left just enough remaining for me to know I am still completely self-aware, or what some might reductively call “sane”. I can remember before the mountain of symptoms piled on top of me, when I could: drive a car, go into a grocery store, be around new people, make eye contact, walk without a cane, read a book, play an open mic night, and control my bodily functions. These are just visible consequences. Inside of my body I have felt ongoing suffering analogous to symptoms of progressive MS. I’ve experienced ongoing cognitive disruption mimicking symptoms of dementia. The quality of the symptoms has been dehumanizing. There have been spans of time in which I’ve had no ability to find comfort, stillness, or any reason for being. As a young girl growing up believing in the endless possibilities of the world, I never could have fathomed that the reality of PWS had any place within the human experience.

Most of my life I’ve had the activist gene gnawing at me– that feeling in your gut that won’t shut off when you see something has gone very wrong. Before I got sick I lived in the Castro in San Francisco. I worked on LGBTQ homeless youth advocacy, performed in “The Vagina Monologues” for Women in the Democratic Republic of Congo and marched on Washington at the National Equality March. I knew what the protocols to fight injustice looked like. Observe suffering, educate yourself, and find a way to inspire others to care.

It took some time after I became sick from rapidly tapering from a benzodiazepine to realize that this damage is not a private issue, or a singular issue. It’s a human rights violation. What happened to me is happening and has happened to countless others, so this is no longer just my struggle to keep to myself. It belongs to the community of sufferers who weren’t afforded a choice regarding their own bodies. A true choice is predicated upon informed consent, which I believe doesn’t exist. People go to their primary care doctor for restless leg syndrome or to a psychiatrist for panic attacks and take home a benzodiazepine, which, over the course of several weeks, can become a ticking time bomb. They are given no legitimate warning of the complete list of drug effects, and have no ability to fathom the violence that can result from trusting their doctor.

For this, I believe, is what injustice really boils down to: being born or put into a position of violence against your will, whether that violence is emotional, physical, spiritual, or social. For iatrogenic sufferers, the violence is all encompassing. Many of these psychotropic medications have been known to cause involuntary dependence, withdrawal, long-term illness, death, suicidal/homicidal thoughts and in some cases, actions. Iatrogenic illness can lead to sufferers being placed in a psychiatric facility unnecessarily, poly-drugging, unnecessary medical procedures, victim blaming, loss of the patients’ support system, homelessness, and the inability to find understanding or care in the medical community. Behind everyone who has fallen devastatingly ill there is often one or a small collection of caregivers who have to make sure the house doesn’t come crumbling down. The caregivers, too, are left with no place to turn with their own grievances.

I don’t see any difference between the iatrogenic epidemic or any other human rights issue that thrives because of the taboo of speaking out. Let’s face it, speaking out about iatrogenic illness is activism. It takes a certain level of risk, and the rewards are not going to be instantaneous. I still believe when we are safe or ready to do so, we must tell our stories. Creating that sort of radical accessibility to storytelling begins with unabashed solidarity.

There is a need for solidarity amongst those of us who cannot leave our homes to rally and speak out against psychiatry and iatrogenic illness–those of us who are hard-pressed to tell our friends and families the extent of what we are experiencing, or fear that sharing our suffering will have negative consequences for the future. As of yet, the culture of the iatrogenically impaired is fringe. It exists mainly online, behind closed doors, and locked up tight in the families and family histories of those who have experienced its horrors up close. These stories, as horrifying as they are, are not an anomaly anymore. This is happening to enough people that if we work together we can make waves–the good kind.

I don’t want to put it solely to the victims to affect change, but they are the only ones who ever have. And it can be as simple or as complicated as changing your profile picture, telling your story publicly, or answering questions about your experience if people inquire about your profile picture. The profile picture campaign is just the beginning; in the coming years I want us to work on more ways to make storytelling accessible. I cannot wait to see what future Octobers will bring for this community. It’s the perfect month to represent us. The weather softens, the leaves begin to change. We remember once again that all of life is in movement to seek balance, and against all odds a little hope rushes back in.

I want to thank Jennifer Haden, Robin Haden, Nancy Rubenstein Delgiudice, Jeri Tresler, Stephanie Williams, and Sapphire Storm Rose for helping me spread the word about IIAM 2014. I want to thank my family and loved ones for their support– BPM for getting me through each day alive and with dignity. And I want to thank Lacy Mroz for their radical love and for never questioning that this really did happen.