A study published in the journal of Psychiatry Research found that younger childhood age relative to one’s classmates may be a risk factor for adult psychotic experiences.  This research supports claims that environmental factors such as school-related difficulties and marginalization contribute to psychosis.

The lead author, Jordan DeVylder of the University of Maryland, and his fellow researchers hypothesized that children with a younger perceived age in school may have an increased risk of marginalization and social defeat.  Consistently lagging behind one’s peers in stages of development might increase the likelihood of social stressors, they write, which has previously been correlated with an increased risk of psychosis.

In 2001, Harvard medical school carried out the national NCS replication survey (NCS–R) on individuals over eighteen to assess prevalence and correlates of mental disorders in the US.  Using this data, DeVylder et al., compared respondents survey answers to questions including, “when you were in grade school, were you usually one of the younger kids in your classroom, one of the older kids, or about average in terms of age?” with self-reported psychotic experiences, such as hallucinations and delusions.

The results, they write, call attention to “the need for greater availability of generalized supportive services for individuals who are younger for their peers throughout childhood.”

The researchers conclude that “school–related risk factors for psychosis provide promising points for community–level intervention, and support the claim that environmental factors characterized by disadvantage and marginalization contribute to psychosis etiology.” 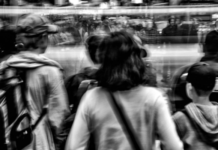 Prozac Nation is Now the United States of Xanax