It’s time to change how we think about and relate to people whose makeup is or appears to be different from the norm. Currently, the dominant way in research, practice and the general public is to think of what’s different—let’s say a biological or neurological difference—as the source of disability and difficulty, and to relate to and treat (in various ways) that biological or neurological difference. But there’s another way to go, and more and more researchers and practitioners are taking it.

That other way is to see the social consequences of “being different” as the major source of difficulty, and to focus help and treatment on that. Those who share this view believe that developmental challenges for people of difference are—and should be related to as—social, regardless of any biological or neurological characteristic. Many of them draw inspiration from the early 20th century Soviet psychologist Lev Vygotsky who wrote that the biggest obstacle facing blind, deaf and retarded people was the “secondary disability” they suffer by virtue of how everyone relates to them and how they learn to relate to themselves as inferior, different, special, less than, etc. Vygotsky insisted that helping these people develop satisfying lives and contribute to their families and communities required paying attention to “the social environment of development” (Vygotsky, 1993).

But with today’s interventions designed to change or “fix” individuals and the neurological functioning and behaviors that cause distress for themselves and others, the social is being forced out of the picture.

Can we turn this around? Among the growing number who believe we can is University of Georgia professor and Vygotskian researcher Peter Smagorinsky. He believes that research and practice to support people of difference needs to be focused on the secondary disability—the social obstacles—by changing the social setting in which the individual is considered to be abnormal, sick, disordered, or in other terms deficient. He has just completed an important book with several other authors whose work does just that—Creating Positive Social Updrafts through Play and Performance: Fostering Creativity and Community among Autism-Spectrum Youth (Palgrave Macmillan, forthcoming, 2016). The book is focused around children and adults diagnosed on the autism spectrum, because far too often the social settings they’re in are isolating and stigmatizing, reinforcing the disability and stunting intellectual and emotional growth. As the authors in Smagorinsky’s book make clear, it doesn’t have to be that way. Each chapter of Creating Positive Social Updrafts… describes programs and provides vivid examples of how people of difference can find and build communities (in particular, artistic and performance-based ones) in which their difference is not only respected but makes a contribution.

One of the chapters is written by my good friend, the talented therapist Christine LaCerva, director of the Social Therapy Group. She does multi-family group therapy in which she invites, challenges and supports children (some of whom have been diagnosed on the autism spectrum) and their families to play and perform with new ways of seeing, speaking, listening and being with each other. The families create improvised scenes and conversations in which, with LaCerva’s help, the children actively participate and contribute. What LaCerva is doing as a therapist is working with these families to change the social setting in which their children are considered abnormal, and in that process, the ‘abnormality’ is transformed—they recognize how our society’s focus on disability, specialness and diagnosis has been hindering them from doing “what’s natural.”

One area where hindering occurs is language and conversation. LaCerva notes that when parents do not talk normally to their autistic children they may, unwittingly, be creating a secondary disability.

People say to infants: “Say goodbye to grandma!” They don’t know what a “goodbye” is or a “grandma” is, but you’re relating to them as a member of your language and conversational community. But autistic children often are not related to as a member of a shared community, of a language community. They are related to as outsiders, which I believe reinforces the alienation of the child in relationship to others. The child quickly learns that he or she is “special.” In my experience, how autistic children are related to is about as important as the disability itself. Ways of being in the world called “autistic” are part of the human experience. It is vitally important that we relate to autistic “ways of being” as something we share as human beings (LaCerva and Helm, 2011).

As someone who has been inspired by Vygotsky (Holzman, 2009, 2014), and one of the few who, like Smagorinsky, have followed through on the implications of his socio-cultural understanding of difference, I believe that he has much to offer to those of us working to remake psychiatric care. 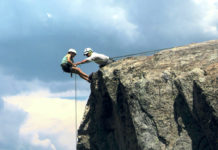 Healing Youth with Nature and Connection: An Interview with Peter Mayfield