The anti-malarial drug trial scandal that has embroiled the Australian Defence Force for the last two years simply won’t go away, despite the government’s best efforts to whitewash the controversy with a flawed “military justice” inquiry.

There are growing calls for a public inquiry to investigate ethical breaches which occurred during a series of Army Malaria Institute (AMI) clinical trials conducted in Bougainville and Timor Leste from 1999 to 2002.

The drugs in question are mefloquine, a neurotoxicant able to cause a “lasting or permanent” brain injury in a sizeable minority of users, and the experimental drug tafenoquine. The latter was found to be “more neurotoxic than mefloquine” by scientists from the US military research institute which developed both drugs.

Tafenoquine was given to more than 1,500 ADF personnel during these trials, while mefloquine was used on 1,300 personnel. Mefloquine has probably been given to an additional 2,000 personnel since its introduction in the early 1990s.

Hundreds of Australian veterans have since been diagnosed with serious neurological and psychiatric disorders, often mistaken for post-traumatic stress disorder. Many maintain they were compelled to participate in the trials. The Department of Veterans Affairs (DVA) has belatedly launched a health outreach program, admitting that the first cases “could be the tip of the iceberg”.

Media attention has to date focused on the health concerns of those affected and the ethical question of whether the subjects provided fully informed consent.

Yet a deeper question is emerging, namely a fundamental conflict between the commercial interests of the pharmaceutical industry and the public interests of the ADF. This could even result in criminal charges against ADF medical officials who conducted the trials and now hold senior military appointments.

How could the ADF leadership have allowed this to happen?

Mefloquine and tafenoquine are both products of the US Walter Reed Army Institute of Research (WRAIR) anti-malarial drug discovery program which commenced during the Vietnam War. The results of early military tests of mefloquine were given to the manufacturer Roche in one of the first public-private partnerships of its kind. These questionable results were then used to shortcut the approvals process by the US Food and Drug Administration (FDA) and other regulators.

By the late 1990s mefloquine was well known for its serious side effects and fell out of favour to the extent it is no longer manufactured by Roche in many countries. Linked to numerous war crimes, murders and suicides over the last 15 years, mefloquine is now banned or regarded as a drug of last resort.

Tafenoquine is already repeating this tragic history, with the direct involvement of WRAIR and the closely affiliated AMI.

The ADF’s deployments to Bougainville and Timor Leste provided an ideal opportunity for AMI and WRAIR to conduct large-scale drug trials on a captive pool of “volunteers”. Tafenoquine and mefloquine were tested on almost every battalion of the Royal Australian Regiment. The results of several of these trials have not been published, presumably because they were unfavourable.

Of the reports that were published, none commented on the serious adverse effects that emerged from the trials. One report that was published found there was “no statistical difference” between tafenoquine and mefloquine in the rate of neurological and psychiatric side effects. Many of the subjects are to this day admitted to psychiatric hospitals or have subsequently suicided — yet the ADF has refused to conduct follow up health studies.

A co-author of the published study has been stonewalling the proposed outreach program for years. Recently, he falsely informed doctorsinvolved in the outreach program that there were “no recorded neuropsychiatric side effects” from tafenoquine; contrary to his original report which found one in eight of his subjects experienced such side effects.

The results of this trial were re-analysed in a 2014 paper co-authored by the current Director of AMI to find that tafenoquine is 100% effective in preventing malaria. The lead author of this paper is a former WRAIR employee who now owns a niche pharmaceutical company awarded a contract by the US Army to develop the drug for registration with both the FDA and the Australian Therapeutic Goods Administration. Should the FDA approve, his company would be given a tradeable “priority review voucher” worth several hundred million dollars.

In the 1990s the Canadian government responded to a similar scandal involving an unlawful mefloquine drug trial on peacekeeping troops in Somalia by disbanding the regiment that was subjected to the experiment.

On the evidence already publicly available, a more appropriate response from the Australian government would be to disband AMI and prohibit the conduct of clinical drug trials on ADF personnel deployed on military operations. The ADF is clearly incapable of providing the corporate oversight needed to protect the interests of its troops against those of the pharmaceutical industry.

This article is reprinted
from The Spectator

You can read more about
Major McCarthy HERE and HERE 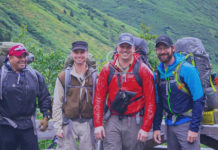 Broken Is Not All I’ll Ever Be: Military Veterans and Psychiatric Drugs 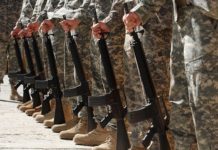 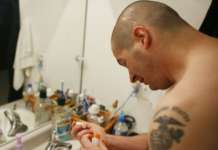 How Our Military Discards Its Wounded Troops