Recovery and Renewal is an independent (unfunded) patient self-help group which I was asked to co-found in Scotland in 2013, with the aim of supporting people recovering from the effects of drugs such as benzodiazepines and antidepressants ‘taken as prescribed.’ Initially we held local meetings in our home town (Helensburgh, on the West Coast of Scotland) and invited people to join ‘taster’ sessions for a variety of alternative non-medical therapies, with a view to supporting recovery. We found that many people were suffering very severe and complex difficulties with their medications, which were not recognised as such by their doctors.

We then began to try to find sources of appropriate support and help for patients experiencing these issues with dependence and withdrawal — and found that there were no existing dedicated support services in Scotland.

This, in due course, led to us becoming peripherally involved with the establishment of the Council for Evidence-Based Psychiatry (UK), and participating as a ‘stakeholder’ in the British Medical Association (BMA) Board of Science project “Prescribed Drugs Associated with Dependence and Withdrawal.” And we are now involved with the All Party Parliamentary Group for Prescription Drug Dependence at Westminster (see more about this here).

As Scotland’s health services are partially devolved from UK Westminster government, and having been repeatedly ignored and/or effectively sidelined when attempting to raise the issues of concern with those at the helm of Scottish health services and Scottish Government (as individuals and as a group), we decided recently that we needed to formally raise the issues ourselves by submitting a formal public petition to the Scottish Parliament.

The petition has been set up on behalf of Recovery and Renewal to raise awareness of the plight of individuals in Scotland who are affected by dependence on and withdrawal from prescribed benzodiazepines and antidepressants — and specifically to ask the Scottish Government to support the BMA’s UK-wide call for action to provide timely and appropriate support for individuals affected.

Several participants of the Recovery and Renewal group are ‘Experts by Experience’ who have many years of personal experience of taking benzodiazepines and/or antidepressants as prescribed on their doctor’s medical advice, and then experiencing dependence and immensely difficult withdrawal. These medications were taken in good faith and trust in the doctors’ professional expertise, but were consequently found to have caused unexpected serious harm.

The petition sets out important summary information about antidepressants and benzodiazepines which will be very familiar to readers of Mad in America, but are intended to be educational for the Petitions Committee members and most readers of the Petition, including public, press and indeed prescribers.

For several years now, National Health Service (NHS) prescriptions have been ‘free’ (i.e. funded by Government) for everyone in Scotland. The prescribing rates for antidepressants rise exponentially year on year.  In 2009/10, 633,791 patients in Scotland were dispensed at least one antidepressant drug, rising to 846,979 in 2015/16. Approximately 20% of adults are being prescribed an antidepressant. As we now know, antidepressants (as with other psychiatric drugs) cause long-term negative effects to the brain and central nervous system, particularly among long-term users. The lessons of the benzodiazepine scandal have clearly not been learned.

Because the side effects, tolerance effects and withdrawal effects of these medications are not medically recognised for what they are, when patients develop related effects/symptoms they are often prescribed other medications — and then polypharmacy confounds and complicates the problems further.

Patients are repeatedly told to go back to their general practitioner and local NHS Health Boards if they experience problems and are dissatisfied. Individual personal experiences show how far this has gotten them: patients currently cannot get any acknowledgement from their GP that (for example) prescribed benzodiazepine and/or antidepressant dependence or withdrawal is the cause of their wide-ranging, debilitating and confusing symptoms. So how can affected individuals hope to get any appropriate advice, care, tests or necessary treatment? It has become abundantly clear that patients are consequently suffering very serious harm, disability or even death/suicide.

Affected patients are finding themselves with apparently vague diagnoses (perhaps only discovered if they ask for their medical notes) such as ‘medically unexplained symptoms’ or ‘functional/somatic system disorders.’ These are essentially psychiatric diagnoses attributing various debilitating and disabling symptoms to the patients’ own anxiety, beliefs, etc. This has the effect of discounting, disempowering and demoralising these unfortunately affected patients still further.

If it cannot be acknowledged that patients can have sustained functional nervous system dysfunction and damage as a consequence of taking medicines ‘as prescribed’ (and sometimes over many years), systemic medical learning and improvement is stifled and patients continue to be further harmed. Meanwhile, the initial prescribing risks remain severely underestimated and misleading prescribing guidelines and ‘best practice’ advice persist unchanged. (I have previously written about this for MIA in “An Outsider’s Observation” in December of 2016.)

Patients who need to safely withdraw, are withdrawing or have withdrawn and are still suffering (even after complete withdrawal) all need appropriate help, including appropriate professional medical help where the issues of the drug effects are honestly recognised and taken into full consideration. Currently, the harmful effects of these prescribed drugs are being routinely evaded, and affected patients can be left feeling deeply betrayed. The principle of Duty of Candour is directly relevant here.

The British Medical Association has called for action on this issue, and we are calling for the Scottish Government to fully support this for the people of Scotland.

People from any country can sign and comment on our petition until May 10th. Then it will be lodged for consideration and further action by the Scottish Parliament Petitions Committee. This promises to be an interesting process — one which we hope will have a much wider impact and contribute to the global raising of awareness of the harms of these prescribed medications. Please contribute to our efforts by signing the petition if you wish to. 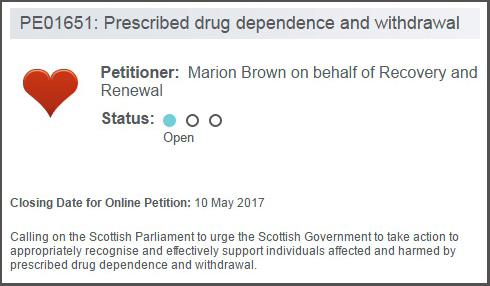