From The Washington Post: Despite major lawsuits and detailed reports pertaining to severe health risks associated with the antipsychotic Seroquel, the drug remains one of the country’s most popular drugs and is increasingly prescribed “off-label” for insomnia, anxiety, and PTSD.

“A Washington Post analysis of more than four years of the most recent data from the FDA’s Adverse Event Reporting System — through the first quarter of 2017 — found about 20,000 cases where Seroquel or its generic equivalent, quetiapine, was listed as the primary or secondary suspect in an adverse event. That included 1,754 deaths in which they were the primary suspect plus 2,309 deaths in which they were a secondary suspect. Overall, 93 percent were apparently the result of off-label prescribing of the drug.

Earlier data, analyzed by the nonprofit Institute for Safe Medication Practices, looked at adverse events by category of quetiapine use and found that off-label prescribing accounted for more than a quarter of 5,657 cases from 2004 through September 2010. More than half of the off-label cases were for insomnia and sleep disorders.” 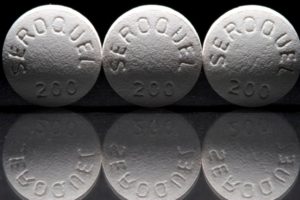