From ACES Too High News: “When a group of community organizations in Baltimore came together in 2015, they already knew trauma figured large in many lives. There was violence in the community, in schools, and in community members’ homes. Police brutality occurred. Many suffered the loss of loved ones to incarceration or death. There were house fires and homelessness. Much of the dysfunction was systemic and rooted in racism, according to a report on a collaborative effort to restructure city organizations and agencies. The goal was to build community resilience.

In 17 months of development — trying out, modifying and putting plans into action — the Baltimore Breakthrough Series Collaborative (BSC) brought together nine different teams, trained and educated 928 people about trauma and resilience, screened 638 people for trauma, referred 321 people for mental health care, expanded connections into 50 new collaborations, created 27 ‘trauma-free’ zones, relied on a ‘it’s not for us if it’s not by us’ concept of families and community members defining what needed to change and how, and each developed their own way to measure growing resilience. And now the model is being put into place in Oakland, California.” 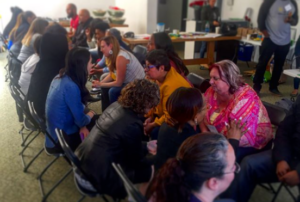 The Year Of Potentiality