From ShortList: “‘I asked to go out for a cigarette but was told that if I tried to leave I would be sectioned against my will. I argued that I was there of my own free will and could leave at any time. I was sectioned,’ Gary says. When a person is detained, despite a code of practice that stipulates otherwise, they can have very little control over what happens to them. ‘Each time I have been sectioned, I felt trapped, powerless and unsafe,’ Gary says.

‘There is little communication by staff other than at medication times. There is little access to fresh air. Restraints by staff and attacks by other patients are commonplace. Coercion to take medication. No one tells me how to appeal my section. My family don’t want to visit as they don’t feel safe on the ward either.’ Gary says he has felt ‘humiliated,’ ‘powerless’ and ‘violated’ when sectioned, on occasions feeling like ‘some kind of non-human.’ He also notes there is little in the way of follow up care. ‘After months of being locked away, I’m suddenly free and alone at home.'” 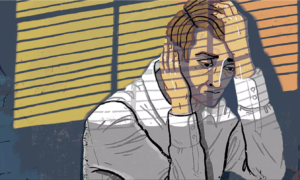