From The Guardian: “A coalition of advocacy groups led by Disability Rights International have written this week to the human rights arm of the Organisation of American States (OAS), based in Washington, to request urgent action. The coalition is calling on the pan-American authority to demand that the U.S., which is one of its 35 member states, impose a federal ban on the method.

The petition argues that JRC’s use of electric shocks, in combination with restraints and isolation rooms, ‘constitute[s] cruel, inhuman and degrading treatment and torture.’ It cites the work of Juan Mendez, the UN’s former special rapporteur on torture, who in that role in 2013 released a report that concluded that the ‘rights of students of the JRC subjected to electric shocks and physical means of restraints have been violated under the UN convention against torture.’

Mendez told the Guardian this week that he had hoped that the practice would have been prohibited by now. ‘The use of electric shocks to control the behavior of children inflicts pain and suffering that at least rises to the level of cruel and degrading treatment and in some cases is definitely torture. That is prohibited by state, national and international law.’

Laurie Ahern, president of DRI and the lead author of the new petition, said the use of electric shocks amounted to ‘state-sanctioned child abuse. It’s torture. That wasn’t acceptable in Guantánamo Bay, but it’s apparently acceptable in a special-needs school in Massachusetts.” 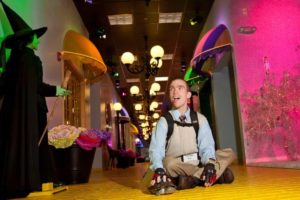