From The Daily Mail: “An anti-psychotic pill which contains a tracker so doctors can check if it’s been taken isn’t being used because it could add to patients’ paranoia, an expert has warned.

The Abilify MyCite has a metallic chip the size of a grain of sand. It was approved to treat schizophrenia by the US’s Food and Drug Administration (FDA) in 2017.

But few patients are taking the pioneering new treatment, which costs $1,650 (£1,275) for a month’s supply, because of concerns and the fact it costs so much more than usual medication.

The idea of swallowing a tracking chip which transmits signals may be too much for patients battling the disorder to handle, according to a psychiatrist.” 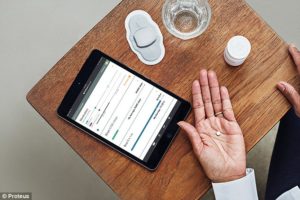