A recent study, funded by the Economic and Social Research Council, in a joint collaboration between the University of Exeter, University of Plymouth and City, and the University of London, highlights vital links between poverty, austerity and welfare reform in England, and overall mental health and wellbeing. Part of a larger project called the DeSTRESS Project, the authors of the report suggest that new mental health policies in the United Kingdom reinforce mental health stigma and narratives of shame while over-medicalizing problems related to poverty and other socioeconomic factors.

This is part of a growing global mental health movement, where the value of Western psychiatric services, ranging from psychotherapy to pharmaceutical treatment, is being extended by professionals and policy makers across national boundaries and cultural groups. Many mental health workers and researchers have expressed grave concerns over this movement, however, insofar as it contributes to what has been described as the pathologization of living conditions that would otherwise be understood better in social or economic terms. This has also contributed to the marginalization of healing systems indigenous throughout the Americas, Africa, and Asia, where there is already a long and troubling history of European colonial oppression.

The assumptions underpinning the global mental health movement are largely the same as those throughout biomedical psychiatry generally. As such, similar problems can be observed in places like the United States and the U.K. According to Dr. Thomas and colleagues, for instance:

“Poverty and deprivation are known to create and exacerbate mental distress . . . Recent analyses demonstrate high levels of prescribing and use of psychoactive drugs in low-income communities, with poorer urban and rural areas such as Blackpool and rural Lincolnshire reaching average antidepressant prescribing of two items per person per year . . . Alongside this, the prescription of drugs for pain relief (often associated with people experiencing poverty-related challenges) has also risen sharply.”

The authors of this report explain that trends like those above are sometimes interpreted to suggest that the British government is taking the mental health of their residents more seriously than in prior decades. Those who take this perspective point to new government policies, for example, that promotes “parity of esteem between mental and physical health in terms of access to services.” Because the number of those using mental health services is increasing, this might also be taken as a sign that stigma around mental health is slowly eroding.

And yet, such narratives, the authors suggest, largely ignore how “these changes are part of an increasing shift towards the pathologization and medicalization of challenging life circumstances,” such as poverty or increased stress at work. They further cite a lack of public discussion about the possibility of harmful side effects of popular antidepressants or their notably low efficacy rates, especially in cases of low to mild depression.

On a more general level, Dr. Thomas and colleagues trace problems regarding the overmedicalization of growing socioeconomic issues to assumptions that mental health interventions should focus exclusively on the individuals who experience the distress while ignoring the context in which those individuals live. This, they suggest, is consistent with a traditional biomedical model of mental health that construes psychological stress as a psychiatric problem that stems primarily from the physiology, neurology, or genetics of the individual experiencing it.

As the authors go on to elaborate, despite the ways that modeling mental health on physical health provides access to health care for those who report suffering from high levels of stress, focusing narrowly on the ‘self’ while marginalizing other factors likewise reinforces “deficit-based” narratives of blame and shame that frame the individual as somehow “deficient” because of the inordinate stress experienced. Here, they add that “the root causes of deprivation and social injustice that are known to sustain poverty and underpin the erosion of wellbeing become obscured” in public consciousness, which in turn makes austerity reforms that cut public funding for social issues much easier to justify.

With these issues in mind, the DeSTRESS project team sought to learn more about the ways in which austerity reforms had affected the overall mental well-being of Englanders living across various low-income areas. In particular, Dr. Thomas and colleagues pursued the following five objectives:

An overarching aim with these data-collection procedures was to learn how narratives about ‘mental health’ operate within the processes of providing services, as well as how they are used by policy-makers to control public discourse about ‘mental health.’

From here, the DeSTRESS team identified the following three general types of narrative across their focus groups and interviews: a neoliberal narrative, where distress is characterized as a result of behavioral or social problems that are ultimately the responsibility of individual citizens to fix on their own; a shame narrative, which frames those who do not participate in society as “engaging in reckless and irresponsible behavior, and a medicalizing narrative, whereby psychological suffering is framed in biomedical terms and suggested to require medical care.

Overall, the authors found that such narratives often contribute to stress and harm for residents in ways that affect “people’s behavior and self-identity and reduc[e] people’s trust and willingness to seek support.” According to one female participant, for example, “I was made to feel, because I had some sort of depression, that I was obviously a danger to myself and to my child…I just stopped going.”

The DeSTRESS team further illustrate how problems associated with such narratives are amplified within a health marketplace in which GPs tend to be the first contact as well as the primary source of care in cases of mental distress. Even though “81% [of the participants] had been prescribed antidepressant medications at some point in their lives,” many GPs expressed frustration with the medical model of mental distress and lack of viable alternatives offered to them. As one GP noted, “I will say this [depression and anxiety] is what I’m going to put on the form, but I know in my heart of hearts that it’s not a medical problem.”

And yet, for those on the receiving end of services, the frustration with the medical model was even more explicit. According to the DeSTRESS project team:

“Patients expressed doubts about the effectiveness of antidepressant medications, and were worried about medication dependency, side effects, and attending talking therapy,” they explain, “Yet despite three-quarters of patients initially resisting treatment, 76% of those in video-recorded consultations were given a prescription for antidepressants or encouraged to refer themselves to therapy.”

A key conclusion of the report is that current healthcare fields in the U.K. are simultaneously flooded with conflicting messages and deprived of useful resources. This already complex dynamic is compounded by politicians and other government officials who either advocate austerity measures in the face of growing poverty or seek to medicalize further distress that is based on poverty-related issues. In this way, narratives of neoliberalism, blame, and medicalization can be seen as closely intertwined, as deficit based characterizations place responsibility for distress related to poverty almost entirely on the individual.

While talking therapy was reported as helpful for a few participants, it was not able to remedy the array socioeconomic issues that were at the basis of most of the participants’ reported distress. There were also many obstacles identified that made psychotherapy overly difficult for participants to access. For the authors:

“Solutions to this situation ultimately require a fundamental shift in the culture and language of policy and practice, more immediate – and ultimately cost-effective, strategies do exist that may help alleviate, and more effectively respond to, distress within low-income communities.”

One of the long-term goals of the DeSTRESS project is to develop materials that can be used to retrain GPs to position themselves in more supportive roles when patients come to them with poverty-related distress. Given the ways such distress is often part and parcel with social stigma and isolation, the report suggests that increased funding for local community groups is another potential intervention to pursue. Yet, U.K. governments have recently cut funding for such local community initiatives, further demonstrating a lack of concern for supporting citizens through poverty-related concerns.

Despite the reality that health services in the U.K. are largely publicly funded, the neoliberal narratives through which they are discussed are byproducts of global trends referenced above, whereby mental health care is being transformed into a transnational economic market. Here, methods of collecting behavioral data and psychopharmaceutical interventions are packaged together and marketed as evidence-based treatments that can be used anywhere in the world.

As such, it is crucial for efforts stemming from the DeSTRESS project to be networked with those around the world working actively to combat stigma around poverty and mental health by decolonizing narratives that link global capitalism, medicine, and psychological distress. 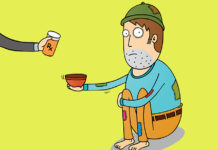