Like most people who hear voices, I am able to live a happy lifestyle: with a family, a job, and all of the other things that the media often claims that I can never have. On its own, hearing voices is not a “cause for concern,” and many voices are actual friends and guides to the voice-hearer. The incorrect portrayal of our experience is not only wrong, but it is also directly causing significant suffering in our community.

Consider the medical model, which claims that voices are directly the product of our subconscious brains. Within this framework, being repeatedly told that our voices will tell us to hurt ourselves or others gives us subconscious expectations for how voices will behave. As a direct result of expecting our voices to be distressing, they acquire these character traits and behaviors. Within the medical model, the myth of a toxic voice-hearing experience becomes a self-fulfilling prophecy.

This theory is supported by research on how culture plays a large role in the voice-hearing experience. Even sub-communities such as psychics, who have different views on voices, experience overall higher quality lives.  The perspective that society plays a larger role than voices in causing suffering to voice-hearers is not new. Fear of discrimination leads voice-hearers to not only have negative associations with their experience, but also to isolate from their family, friends, and community.

To make matters worse, the medical authority position on how to “treat” hearing voices (pharmacological solutions) is not even proven to be effective (although other evidence does suggest potential benefits). Non-pharmacological solutions such as helpful perspectives and behaviors for dealing with voices are on the rise, and new techniques such as IFS and AVATAR Therapy represent progress. Given that voice-hearers are very much able to influence their experience, however, it is unclear why no one is collecting the tools that have already helped our community.

Over the last century, hundreds of millions of voice-hearers have (of course) already developed many techniques and strategies for improving our own lives. Tools for common challenges such as focusing and training our attention, for navigating hostile voices to harmony, and for preserving our physical community have been created and implemented almost as an adaptive reflex to our lived experience.

Many voice hearers have even been able to achieve experiences where they talk only to voices that they like, on topics that they enjoy, and only when they are not busy. Without a collective knowledge base, however, most new voice-hearers have to reinvent the wheel, starting from scratch on how to incorporate hearing voices into their everyday lives.

One of the main obstacles to building out a collective knowledge base of voice-hearer strategies is the discrimination against our community. Although 5%-15% of people will hear voices in their lifetime, voice hearers are not accepted for who we are, and it is not safe for us to stand in the light. Even friends and family members are at risk of being swayed into deep doubt on our rationality, intellect, and dependability. With such high social costs, it is safer for most voice hearers to share neither their situation nor their solutions.

Compared with other communities with strange beliefs, (wiccans, flat-earthers, and so on), it is fundamentally life-damaging to admit to hearing voices. Worse, the result of this situation is that voice-hearers who are the most publicly visible are also the people going through crisis, right during their moments of adversity. Based on the visibility of those in crisis, compared with the more silent group of voice-hearers with control over their circumstance, the public and medical perception of our community remains skewed.

In attempting to build out a community of voice-hearers who can share support and strategies, as I have contributed to through my work with Hearing Voices Network USA, the challenge of discrimination is an obstacle in several ways. Aside from internal fears of admitting to voice-hearing, there is also genuine pressure from families and providers to keep our community separated. Even those who see the potential value of community support groups openly acknowledge their fear that a community of voice-hearers could inevitably confuse each other into the depths of delusion.

The reality is that most voice hearers, even with non-medical model frameworks, are fairly rational people. For example, in support of a telepathy model, there is ample evidence that brainwaves synchronize during conversations, and also during group events such as watching movies. That is not to say that the telepathy model makes complete sense: it does not account for the consistent character and content of voices regardless of physical location. Regardless, compared with a linear medical narrative that has pathologized voice hearing, these sorts of conversations about the various frameworks promote the dignity of non-consensus reality.

Instead of being encouraged to explore our experience, voice-hearers are shut down into a narrative that itself has never been proved beyond the shadow of a doubt. Colors are technically ”not real either,” except that almost every person shares in this hallucination of converting external wavelengths into the experience of color. If it was only 5%-10% of us that saw color, however, would everyone else insist that we must be medicated because they do not see it too? Would they never even give us the respect to truly analyze the different possibilities?

Voice hearing groups help each other find insight, consistency in our interpretations, and compatibility with our community. The main difference in these groups is that we present with the humility to not insist on our own viewpoints, and maintain polite equality when helping each other sort through voice-related confusions and hostilities. This is a truth that I have heard at a national level, as well as personally seen, over and over, with my involvement in Hearing Voices Network NYC and New York City Peer Workforce Coalition. Compared with medical settings, the biggest difference in voice hearing groups is the honesty in sharing our stories.

In medical settings, the fear of hospitalization and increased medications, and of negative feedback to our families who will then suffer in concern, teaches us how to say the right things and show “progress.” The openness with which voice-hearers can present our stories amongst ourselves is far more useful for pointing out flaws in interpretation, and for giving advice on achieving better lifestyles. Even the act of truthfully speaking out loud about our stories decreases our isolation, and provides a deep sense of relief as we connect to the physical world around us. Lastly, some of the stories that I have heard are, from a creative standpoint, inspiring and beautiful. Their being buried in silence, out of fear, is a loss to the entire society.

If voice-hearers were encouraged to build a community, our body of collective knowledge would rapidly improve quality-of-life for the millions of people with voice-based challenges. The actual task of building a database is fairly simple: participating people simply write down the tools that have helped them in their own lives. Some basic analysis on the tools that have worked for many people, or that can help across frameworks, would quickly show the techniques that can have value across the population.

A completed resource guide, validated by academics (if necessary), and distributed to providers would provide a new style of assistance to voice hearers in crisis. Eventually, creating a living digital database of collected strategies, perhaps even validated by community upvoting on the tools that they find useful, will eliminate the many unknowns of how to navigate a life with voices. It was with this much-larger goal in mind that I published Life with Voices: A Guide for Harmony, which presents the toolkit that I have personally used to navigate confusing beliefs and defeat hostile voices.

To anchor the conversation: one example of a useful technique or perspective involves how to keep attention on the physical world. The problem, at least for me, was that the high stakes of my voice storylines made it hard to prioritize the more unexciting events in the physical world around me. Eventually I realized that, even outside the medical model, solving a crisis with voices would not actually change anything in the physical world.

For example, telepathy or reacting to technology may change perspectives with you and your voices, but will not create impact until someone goes out and acts. Through this realization that mundane tasks in the physical world accomplish more impact than conversations with voices on national security, I was able to keep my focus on physical people and activities.

Over time, I developed additional skills, such as how to negotiate and enforce agreements between myself and the voices. Compared with a constant circle of talking to medical providers on whether or not the voices are being distressing, these concrete tools have accomplished far more practical good.

As stated earlier, one main obstacle to building out this body of collective knowledge is the pervasive view of voice-hearers as confused victims with nothing to contribute, even on the topic of our greatest mastery: our own lives. Through my work with iSPS-US and an advisory role for the Yale Cope Project, I know that this perspective is changing. The value of lived experience is being acknowledged by both academics and providers. As with all change, however, it is slow-moving, and encountering resistance from the “traditional” school of thought.

Even though a collective knowledge of lived experience is a straightforward and present answer for improving millions of lives, it has become increasingly clear that it will take an organized community of voice-hearers and their allies to take back credibility and authorship on the narrative of our own lives. To share support and strategies, and to fight discrimination against hearing voices, our community needs more leaders and allies. If you are interested in joining or supporting the movement, please connect with me through [email protected], or on my website lifewithvoices.com.

The idea that people will develop skills for their own life is fairly common sense. I am actively asking others to question their doubts on voice-hearers, and to give us a more central role in the conversation. More importantly, thank you for your faith and respect in my responsibility, clarity, intelligence, and knowledge. Strange beliefs or not, voice hearers are human beings, and we should not have to earn our dignity. 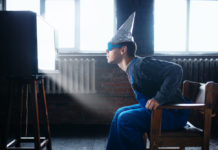