From STAT News: “As a consultant . . . he has the dubious distinction of having advised two of the most notorious prescription drug makers, whose business practices jeopardized the health of countless Americans. As for being effective for these clients, Giuliani had a mixed record.

One client was Purdue Pharma, which sold the OxyContin opioid painkiller . . .

In 2007, the U.S. attorney in Virginia sought a $1 billion fine and felony criminal charges against the company and top executives for fraudulently marketing its painkiller. The drug maker hired Giuliani to work his government contacts to minimize the damage.

. . . Giuliani won credit for the maneuver. And as a result of the deal, Purdue was allowed to keep doing business as usual — which, as subsequent probes have shown, included egregious marketing practices that contributed to the opioid crisis and caused unnecessary turmoil.” 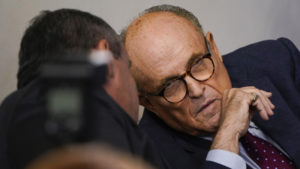