From Aeon: “In the early 1970s, I was a naive 21-year-old, in love with my first job since graduating university, as a nursing aide on a psychiatric ward in New York. Three times a week, a row of older women would sit in a line against the wall in the corridor. Some were slumped motionless in their chairs. Others seemed scared and agitated. Occasionally, one would try to run off and was brought back to the chair by kind but firm staff. When I found out that they were waiting for ‘electroshock’, I volunteered for the job of sitting with them as they came round from the general anaesthetic, after the electric shock and the seizure. They would ask me: ‘Where am I?’ ‘Who am I?’ ‘Why is my head pounding?’ and ‘What did they do to me?’ I remember being unable to answer the old lady who asked me, in tears: ‘Why would they do such a thing to me?’ . . .

The most common response I get when mentioning shock therapy beyond mental health circles is: ‘Are we seriously still doing that?’ To grasp the persistence of this treatment, you need to go back in time. Electroconvulsive therapy (ECT) joins a long tradition of applying extreme physical procedures to distressed or distressing people: harsh laxatives, bloodletting, blistering of the forehead, rotating chairs, surprise baths, being packed in ice, inoculation of scabies, force-feeding chimney soot and wood lice and, briefly at the beginning of the 20th century in the US, surgically removing teeth, testicles, ovaries, gall bladders and colons. The 20th century witnessed malaria-induced fevers, insulin-induced comas and a range of ‘psychosurgery’ procedures including hammering an ice-pick-shaped instrument into the brain via the eye socket (‘prefrontal leucotomy’) and insertion of radioactive yttrium (Y90) into the brain (‘subcaudate tractotomy’) . . .

In Hungary in 1934, the psychiatrist Ladislas Meduna induced seizures in patients by injecting camphor and metrazol. After giving his first injection, Meduna ‘was so distressed he had to be supported to his room by nurses’, according to researchers. Meanwhile in Italy, the neurologist Ugo Cerletti was giving electricity a go. He experimented first with dogs, placing electrodes in their mouths and rectum. Many died. He discovered a way to bypass the heart, at a slaughterhouse:

The hogs were clamped at the temples with big metallic tongs which were hooked up to an electric current (125 volts) … they fell unconscious, stiffened, then after a few seconds they were shaken by convulsions in the same way as our experimental dogs … I felt we could venture to experiment on man.

His first human subject was a 39-year-old engineer from Milan, whom the police found wandering around a Rome train station in a confused state. When the first electric shock failed to produce the desired convulsion, Cerletti and his assistant discussed whether to administer a more powerful shock. Cerletti reported:

All at once, the patient, who evidently had been following our conversation, said clearly and solemnly, without his usual gibberish: ‘Not another one! It’s deadly!’

Cerletti proceeded anyway, in the first of the millions of instances that were to follow, and which continue today, of people being given this treatment despite clearly stating they don’t want it. After another, larger electric shock, which did produce a convulsion, the engineer couldn’t recall being shocked; the first of millions of instances of the short-term memory loss caused by this treatment.

Like Meduna before him, Cerletti wasn’t insensitive to the effects of what he was doing on the person in front of him:

When I saw the patient’s reaction I thought to myself: this ought to be abolished! Ever since I have looked forward to the time when another treatment would replace electroshock.

I had a similar reaction to Meduna’s and Cerletti’s when, at that New York hospital, I witnessed my first ECT, along with some medical students. When the psychiatrist asked: ‘Would anyone like to press the button?’, the five other young men were all keen. Having watched the woman convulse and then become limp, I wheeled her unconscious body back down the corridor, not a very reassuring sight for the queue. I ended up in the car park, throwing up. Even before knowing what the research says about ECT, I’d had, quite literally, a gut reaction that something was dreadfully wrong. But to understand why ECT still happens today, remember that the five medical students either didn’t share my revulsion or, perhaps, chose to conceal it from their teacher.” 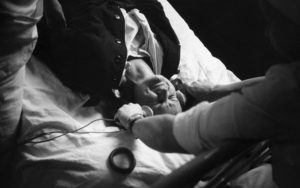