Employees of several companies that conduct clinical trials for the pharmaceutical industry have just published a paper to test a tool intended to reduce the placebo effect in drug trials. It’s called the Placebo-Control Reminder Script (PCRS), and it was created by and licensed to several drug companies.

Their study’s goal was to demonstrate that the PCRS, when used in a clinical trial, can make the active drug look better by diminishing the improvement that people naturally experience in the placebo arm of the trial.

Elan A. Cohen led the study at the Hassman Research Institute (HRI). It included other employees of HRI as well as employees of APEX Innovative Services, Collaborative Neuroscience Network (CNN), and VeraSci. The owner of VeraSci is also a listed author. All of these firms are funded by the pharmaceutical industry to conduct clinical trials. The study was published in Neuropsychopharmacology.

Cohen et al. write that “The remarkably high and growing placebo response rates in clinical trials for CNS indications, such as depression and schizophrenia, constitute a major challenge for the drug development enterprise.” 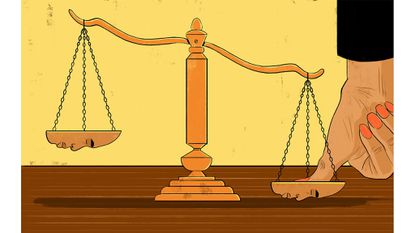 Some researchers suggest that the strong placebo effect is a good thing, which could be harnessed to enable improvement without an active drug’s adverse effects. For instance, Beth Israel Deaconess Medical Center and Harvard Medical School have set up a Program in Placebo Studies & Therapeutic Encounter (PiPS) that aims to enhance the placebo effect.

Nonetheless, the placebo effect is quite troubling to the pharmaceutical industry, as their drugs have to be better than placebo (literally, better than nothing) to be approved for use—and they often struggle to meet that mark.

The placebo effect—including natural improvement over time as well as an improvement due to expectations—is quite powerful when it comes to diagnoses like depression and schizophrenia. According to the authors, up to 50% of people taking a placebo find their depression improves, while for schizophrenia, that number is 41%.

There are several reasons for having a placebo-controlled study. First, the placebo group can indicate how many people would have improved anyway, even if they did not take the drug. This can include natural improvement over time and regression to the mean (in which the most severe cases improve significantly more). Second, the placebo group can indicate the effects of expectation—that is, people believe they are taking an active drug and so improve because they believe they will improve.

But while these reasons are helpful to the consumer, they are dangerous to the pharmaceutical industry since they make the active drug look less appealing. After all, if the same number of people improve on the drug or off it, then why should the consumer take the drug?

Cohen and the other consultants believe the PCRS can solve this problem.

In essence, the PCRS is a technical and purposeful way to break the blinding of a study—to ensure that the participants know whether they are receiving the active drug or not.

Researchers already argue that accidentally breaking the blind of a study is a severe problem that biases the study drug’s results. As Irving Kirsch writes in a peer-reviewed paper about antidepressant ineffectiveness, “The difference in improvement between drug and placebo is not clinically meaningful and may be due to breaking blind by both patients and clinicians.”

It is unclear how it could be considered ethical to purposefully create this bias in a clinical trial.

The consultants included 137 participants, all of whom met the criteria for current depression of at least moderate severity but no suicidal thoughts. Some had formal depression diagnoses, while others had diagnoses of schizophrenia or schizophreniform disorder.

Both groups improved over time, consistent with the natural course of “depression” and with the placebo effect. However, in line with Cohen et al.’s expectations, the group that received the PCRS showed less improvement than the group that didn’t receive the PCRS.

That is, the “true placebo” group improved enough to no longer meet the criteria for depression severity that got them into the study in the first place. But those in the PCRS group improved only about half as much and still had moderate depression according to the BDI. So, the PCRS works as intended—it helps stop people from getting better on their own.

Cohen and the other consultants write that their results demonstrate that the PCRS is a useful tool for the pharmaceutical industry’s development of new drugs for psychiatric conditions.

“By enhancing signal detection, such procedures may help drug developers progress compounds to faster approval and reach patients who are suffering sooner.”