What if I tell you that with the diagnosis of bipolar disorder and a few psychoses, you can still live a very nice life?

It was in 2003, while living in Amsterdam, working as a financial analyst of banks and a portfolio manager, that I landed in a psychiatric hospital with a psychosis. Since then, I have had ‘relapses’ and was told by the psychiatrists that it’s a chronic illness that I need to monitor for the rest of my life. I was told about the life of misery awaiting me because of my bipolar ‘disorder’, where I would probably not work, create a family, or ever be happy. If you read a description of the condition, the picture looks indeed gloomy. It tells you about your inability to look after your finances, a libido out of control, and difficulty forming relationships.

It was after my second psychosis two years later that I decided to defy the odds and focus on creating a happy, joyful life, regardless. I think the main reason for my decision to do well in life was motivated by the fact that I am simply a happy person by nature. I love life, I love to laugh, spend time with my friends, and enjoy simple pleasures, such as good coffee in the morning, a nice glass of wine in the evening, cooking yummy food, listening to singing birds in the garden and deriving pleasure from work.

And so I sat down and did my research. My main problem with calling my experiences ‘psychosis’ lay in the fact that I had enjoyed it. A new parallel reality would open the doors to me, and I would end up dealing with magic. I would witness the manifestation of angels, experience lucid dreaming and feel incredible connection with the universe and its creatures. Yes, there was that side of ‘crazy’ things while being ‘psychotic’, such as proclaiming myself as Jesus on my online social networks, and over-spending my money, but overall, if someone would ask me whether I would like to experience it again, I would say a ‘definite yes’.

But the society here in the western hemisphere doesn’t allow you to experience an initiation into magic, shaming and stigmatising you through the whole journey. I quickly realised after my first psychoses that from the outside I need to look subdued, sad, ashamed and full of regrets because of daring to end up in anything remotely resembling ‘mental illness’. I saw pitying expressions on the faces of people in my life, as if there was something wrong with me and I should live up to expectations of bad things associated with a psychiatric disorder and give up on having a happy, fulfilled life.

I decided to challenge their assumptions and do not just well, but very well. After my second psychosis, I applied for two PhD bursaries, winning both, and completed a PhD in England in the field of sociology. I am a Doctor of Philosophy now. I also became a mum and was happy in a long-term relationship until it ended. I moved countries three times after my diagnosis, landing in interesting, exciting jobs, making friends around the entirety of Europe. I learned another language, next to three other languages I already spoke. I can care after a child and a cat, and at this moment am living my dream by lecturing at a Dutch university.

My research into the phenomenon of the psychosis showed me some interesting tendencies. First of all, it is assumed for some reason that it is the same experience for everyone involved. But from many talks I had with other patients who have had psychosis, I learned that it’s really totally different experience depending on the person. Some have had a ‘magical trip’ like me, while others had the biggest nightmare of their life. I do think it’s also wrong to call anyone bipolar, based on the fact that the psychiatry gives you a diagnosis in case you dared to end up in a psychiatric hospital more than once in your life.

However, I am not anti-psychiatry as such, and I disagree with the current tendency to divide the debate into half: one half is pro-psychiatry, while another is anti-psychiatry, with the discussion mostly focusing on whether to take psychiatric drugs or categorically refuse them. There should be something in between.

I have been both on medication and off it. I also met some very nice psychiatrists and some not very nice ones. Once, I experienced a nightmare psychosis while being on aripiprazole, thinking that I was ‘safe’. It was nothing like what I experienced with my ‘naturally’ occurring psychoses. But after looking at all possible options I decided to take another medication, and with the help of an excellent psychiatrist, I am now on a ‘cocktail’ of medication that has zero side-effects but yet keeps me stable (I hope). It was trial and error for a year, before I became ‘satisfied’ with the solution that both my doctor and I are happy about. 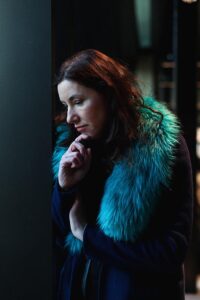 Of course, my life is not perfect. I do lead a meaningful life but I have also been living a very hard life. Just to give you an example, I ended up with a massive, very upsetting psychosis in October 2020, and had to go to the hospital FOUR times within two years. It was very difficult for me to relocate to a new country right before the Covid nightmare began, as well as grieving the loss of my incredible stepdad last year, and the death of my cat in October 2020. The picture for this article is me, trying to survive that year, not very successfully.

I was eventually put on injections and spent a year as a zombie, begging my psychiatrist to diminish the dose. I was writing to him every two days, explaining my problem: I felt sick, lifeless, unhappy, in total despair and the possibility of ending my life briefly passed my head, but I had to stop that thought because I have a son to raise. Thank God my psychiatrist was listening, and eventually I was put on the lowest dose possible (paliperidone) and another medication (cariprazine) was added, because my doctor and I both agreed that I am simply too vulnerable to psychoses. I have an extremely stressful life.

The medication on which I am now, my personal cocktail of drugs, is working, I hope, but I am terrified to develop another psychosis, regardless. It isn’t the psychosis which is a problem, but the labels attached to it. You feel like a total failure afterwards, guilty, ashamed and full of regrets. I am glad I found a really honourable doctor who looked for solutions together with me, such as finding the formula that helps me to avoid a psychosis, while allowing me to lead an active, full of meaning life. But I know what the nightmare is when you emerge from the hospital on a killing dose of anti-psychotics. I have been there; I have been there several times. I am not sure how I survived my own psychiatric nightmare, but I am thankful to God that I am still here, and want to be happy, alive, and joyful.

But what if it did happen again, I wonder? Why is it such a big deal that someone dares to have a psychosis? Why are we, as a society, so terrified of this phenomenon that it’s constantly portrayed in the media and films as the worst possible outcome in a person’s life? I can assure you that when I am in a ‘psychosis’ I have no tendencies to harm anyone. I am placid and nice. But the label is so damaging that every time I emerge from the hospital, I have to deal with a feeling of shame that is much more damaging than the condition itself. (I refuse to call it an illness, because I genuinely don’t feel ill. I feel absolutely amazing.) I feel guilty and afraid. Here I go, I tell myself, I did it again.

There is also a feeling of resentment from others, I noticed, when you do well in life after a psychosis. The expectation is that you should give up on ambitions in life, and for some reason, I feel a wave of waiting from others to see me ‘failing’ again. There are rumours and accusations, and the desire to cancel me.

But I stay. And I am determined to live my life well. I worked extremely hard to be where I am now, and I plan to continue to work hard to have a good life, full of meaning.

When researching everything around psychosis, it was in non-western philosophies that I found some answers that appeal to me more, rather than the label of a diagnosis or an acceptance of a chronic disease. I found the description of shamanism as something that reflects my own experience. But I also found some answers in Christianity, and other religions. It is in the field of magic being possible that I found some reassurance that I am not simply mad. That maybe I am simply gifted, and possess a very vivid imagination. Maybe it isn’t an ‘illness’ (I don’t feel ill at all), but a call for spiritual emergence.

I don’t trust the gurus in the current ‘New Age’ phenomenon because most of them come from a position of privilege rather than from first having experienced trauma and hardship. You can become a shaman only if you have had a ‘psychosis’. But no one will teach you any shamanism in the west, because we all became too rational, too judging, too ‘normal’. And therefore, I search for my own truth, my own meaning, where I want to live my life well.

Living life well, however, is never in isolation. I came out publicly with my condition (including writing on my blog) because of lack of support and information from people with a similar experience. Most available narratives are sad stories centred around the aspect of a disease, or terrifying tales about psychiatric treatment. But what if there is also something in between? What if some of us have had a good outcome from the ‘psychosis’? What if some of us are happy and fulfilled, despite the label of the diagnosis?

I might be a ‘crazy cat lady’, but I do have things to say, regardless. I have two master’s degrees and a PhD, I lived in four different countries and achieved a few things, despite having landed in a psychiatric hospital more than once. I refuse to feel ashamed or sad, because I made a massive effort to remain happy.

And I want others to feel the same and do well in life.