These are not happy times for the embattled drug maker AstraZeneca.  The patent for Seroquel has expired; the company’s profits have plummeted; and its CEO, David Brennan, has just been escorted to the exit door.  It seems like a good time to look back at sunnier days, when Seroquel, the ex-blockbuster antipsychotic, was a hot new drug for bipolar disorder.

As it happens, I recently got an email from “David Bronstein,” the medical ghostwriter who appears in my book, White Coat, Black Hat.  Bronstein (a pseudonym) is a developmental biologist who provided some of the book’s best stories, especially his brutally hilarious accounts of his work for a “medical communications” company in the United Kingdom.  He was writing to tell me about a branded AstraZeneca t-shirt he had acquired at a conference many years ago.   It was designed to promote Seroquel.  “Get yourself in the mood,” the t-shirt read.  “Ride the Mood Elevator.” 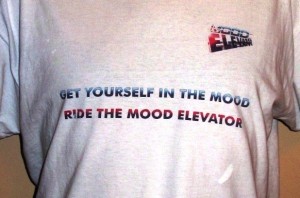 The Mood Elevator was a converted flight simulator that AstraZeneca was taking around to psychiatric congresses.  “It was about the size of a small ship container,” Bronstein says.  “You could see it rearing up and bucking about, somewhat on its own on the far side of the exhibition hall.  But on closer inspection it wasn’t that great. I think it had been acquired from a fairground rather than Boeing or NASA and had been gotten up to look ‘futuristic’.”  The idea was to corral psychiatrists into riding the flight simulator as a way of simulating the ups and downs of bipolar disorder.

At the time, treating bipolar disorder with antipsychotic drugs was still relatively new.  Antipsychotics had traditionally been prescribed for patients with schizophrenia.   But that was before the development of the “atypical antipsychotics” such as Risperdal, Zyprexa and Seroquel in the 1990s.  The atypicals were touted (wrongly, as it happens) as having a better side-effect profile than the older antipychotics.  So drug makers such as AstraZeneca had begun to move aggressively into other “disease markets,” most notably bipolar disorder.  Hence the Mood Elevator.  Here is Bronstein’s description:

“The usual simpering agency women in their black business suits were in charge of the corralling, and as usual, their faces and sharp clothes on closer inspection looked tired.  We sat down inside in about 3 rows.  The ‘flight capacity’ was about 10, I think, but it was far from full. Then the lights dimmed, and with a hydraulic whine and jerk, the show began.”

“Instead of a fake airplane window they had this cheesy movie about a young middle class white woman with bipolar disorder.  Whoosh!  And up we went, with accompanying, cheesily dramatic music, to find ourselves inside her excited mind as she flirted with a black guy at a party.  Then crash: down we went into blue-lit, solitary despondency.  Then whoosh! Up we went again.  ‘I’ve got a date tonight with that gorgeous guy I met at the launderette,’ she sighed.  Then crash! Down we went into suicidal gloom.  Finally we reached a happy equilibrium full of flowers and ‘relaxation’ music.  She said she was so happy she got treatment in time, and that her sexual disease tests have checked out OK.”

“That was the end of the ride and we were turned out. We had ‘ridden the Mood Elevator.’  I wanted to chunder.  But I still have the t-shirt.” 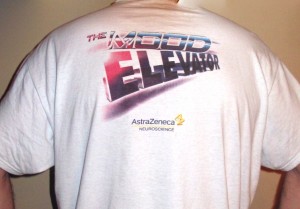 I would be interested to hear from any readers who remember the Mood Elevator.  It sounds like a fairly benign marketing tool, at least compared to what came later.  In 2010, of course, AstraZeneca was forced to pay $520 million to settle federal charges that it had marketed Seroquel illegally, including the charge that the company had paid doctors to sign ghostwritten journal articles and give promotional talks about off-label uses of Seroquel.   Next to that, the Mood Elevator seems almost quaint, if a little tawdry.  As Bronstein puts it:

“Somewhere once, I’ve often wondered where, I came across a fictional account of some colossal mutant horse standing about, elephantine but somehow out of place on the edge of a shoddy fairground.  All I can remember of the description was that ‘it was not a figure of fun.’  That would be apt too for the Mood Elevator.  The movie’s quality was depressing, and somehow distasteful; like the contraption itself, neither the scripting nor the production appeared to have involved the agency’s premium talent. You came out feeling as if you’d got something sticky on your hand.”

(Originally posted at The Chronicle of Higher Education’s “Brainstorm” blog.)

Popular Drug Reveals the Issue of “Off-Label” Use