I’ve been trying to recall if there was an exact moment when my life began to pivot in a new direction — when the seed of an idea got planted to create a docuseries that would help free Americans with disabilities committed to long-term care facilities against their will. So far, I have released two episodes in the series. The second, now up on YouTube, follows two men at a so-called neurorehabilitation center in Western Massachusetts as they struggle against isolation, aggressive “behavior techs,” and overmedication. One of the men in the film, EJ Schlup, told me he saw patients in a “perpetual state of pharmaceutical stupefaction,” witnessing one man “pass out into his plate full of food, while another had to be verbally guided down the hall using a walker, unable to hold his head up or stay focused.”

Perhaps my motivation to create the #LetThemOut series started when my son was diagnosed on the autism spectrum at the age of three, or while I was filming a documentary for public television in 2015 about the warehousing of people with disabilities in developing countries. Inside a rehabilitation center in Mexico, I saw beds that turned into cages and children with cerebral palsy who’d been “mummified” into submission with bandages and duct tape. When I returned from Mexico, advocates told me about institutions in the U.S. that were treating children and adults with disabilities in similarly abusive ways — sometimes chemically restraining them (using sedatives, antipsychotics, and other types of drugs to control their behavior) and often isolating and neglecting them.

In my naiveté, I decided to visit one of these places for the first time a few months later upon invitation from a patient who’d been fighting for his emancipation for years. While I was never arrested walking into institutions abroad, I was escorted off the premises by police within minutes of entering this locked U.S. facility with a chain-link fence around it.

As a result of what’s known as “handicapitalism,” corporate interests often take precedence over the rights of people with disabilities in this country — their right to see whomever they want whenever they want, for instance, and their right to come and go as they please. People with disabilities — intellectual, developmental, and physical — have become big business in the U.S., and corporations are chasing the money. In the wake of deinstitutionalization, we no longer have the vast asylum system we once did. Instead, something more insidious has taken root — for-profit institutions that call themselves neurorehabilitation centers, group homes, and other official-sounding names. This multi-billion-dollar industry shapes how the institutional care system operates, from the type of care patients receive to how much states pay for it.

According to Disability Rights New York, which provides free legal and advocacy services to people with disabilities, about 75 percent of the patients at the Western Massachusetts neurorehabilitation center that I investigated are from New York. Why? According to FOIL requests with the New York Department of Health, the state of New York pays out-of-state facilities like this one up to twice as much as it pays its own in-state facilities to care for high-risk patients. (New York apparently does not have enough beds to house everyone in-state.) With approximately $120 million a year on the line, out-of-state facilities like the one in Western Massachusetts send recruiters to New York hospitals to market to patients and their families desperate for help. EJ Schlup says a recruiter pitched him a Jacuzzi, single-occupancy rooms, a world-class gym, a massage therapist and more while he was recovering from a stroke in New York last year. When he arrived at the neurorehabilitation center, he saw the place for what it actually was — a “prison without bars.”

When Congress passed the Americans with Disabilities Act in 1990, Senator Edward Kennedy called the legislation the “emancipation proclamation” for people with disabilities, and no doubt, people have made progress toward equality in the workplace, schools, and communities since then. However, the most egregious form of discrimination still exists — the involuntary segregation of people in institutions. A person can be sentenced to what essentially amounts to life in a prison simply because of a disability. Would society allow that for any other group of individuals — incarcerating someone because of the color of their skin or their gender identity?

Once inside these facilities, people with disabilities are often stripped of even more rights. Between 2000 and 2016, the Western Massachusetts facility I investigated for my series filed for guardianship on 112 of its patients, according to a case-by-case review of court records. (The facility holds up to 164.) A guardian is someone who makes personal and medical decisions on behalf of a person who has been declared “incapacitated.” Many legal experts describe the guardianship process as a kind of civil death. “The life you live,” one disability rights attorney told me, “is what someone else lets you live. You become an ‘unperson.’” In Massachusetts, a special type of guardian called a Rogers guardian must be appointed to administer medications to these so-called incapacitated persons. At the neurorehabilitation center in Western Massachusetts, over 75 percent of the patients have received antipsychotics — close to four and a half times the national average for care facilities like it. Chemically restrained and stripped of their ability to make even the most basic decisions (like where they want to live), many people with disabilities never get out.

In his opening statement at a congressional hearing on guardianships in 1987, Congressman Claude Pepper called the practice the “most punitive civil penalty that can be levied against an American citizen, with the exception, of course, of the death penalty.” He went on to say that “the typical ward has fewer rights than the typical convicted felon . . . By appointing a guardian, the court entrusts to someone else the power to choose where they will live, what medical treatment they will get and, in rare cases, when they will die.” Thirty years later, the number of guardianship cases in this country has only grown.

“Why do I have rights if I can’t use them?” one former care facility detainee asked me not long ago. Somehow, we have come to think of the incarceration of people with disabilities as normal and even humane. These modern-day institutions might look nicer and have pleasant-sounding names like Vibra and CareOne (versus the Belchertown State School for the Feeble-Minded, for instance), but the thought behind them is the same — people with disabilities need to be “taken care of” in isolation.

While covering the burgeoning civil rights movement in the South, journalist David Halberstam became famous for taking a definitive stand against racism in his writing. During an interview in 1999, the former New York Times reporter (who died in 2007) commented on his coverage from the 1960s. “The editorial bias is not in the reporting, the bias is in the ugliness of the act,” he said. Many journalists experience a point in their career where they witness something so appalling, they begin to realize the “he said/she said” model of journalism just won’t cut it — that something more is needed to capture the abject injustice of a situation. I have pitched the story of people with disabilities being committed to long-term care facilities against their will to numerous media outlets. At times, the response has been almost hostile — a questioning of my motives. Other times, editors have told me they’ve heard the story before. As a result, I decided to invent my own model of advocacy journalism to get this story told, incorporating targeted social media campaigns and short documentaries as a way to call out decision makers and start a grassroots fire for change.

To dedicate myself to this endeavor, I quit my job as a journalism professor in July 2016. My experiences filming people with disabilities compounded by the hateful rhetoric spewing from that summer’s presidential campaign made me realize I had to step out from behind the gates of academia and reclaim my voice. I bought a camera and editing software for my computer and carved out an office for myself in my son’s overcrowded toy room. After releasing my first episode, I heard from people across the country who still had loved ones trapped in institutions: a father who was forced to undergo a psychiatric evaluation and threatened with arrest during his crusade to free his son with Down syndrome; a wife who dedicated her life to advocating for her husband who, since being institutionalized following a traumatic brain injury, had lost all of his bottom teeth and was once sent home with a bedsore that turned out to be MRSA. Sadly, Terry Lawrence died just last month at the age of 57.

There have been other losses and setbacks along the way as well. Adam Graziano, the subject of #LetThemOut’s Episode 1, was liberated from the Western Massachusetts neurorehabilitation center I profiled in my series a few months after the episode’s release. However, as his family continues to struggle to find services for him, Adam’s adjustment to life on the outside has been challenging. At one point, Adam told me, he even called the facility and asked if they would take him back. Some people might see this as proof that Adam should have stayed locked up, but to me, it’s just more evidence of how we continue to fail people with disabilities. Community integration only works with supportive services — and an overall supportive society. 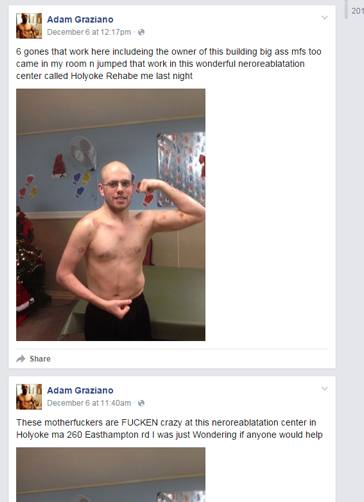 For me, probably the biggest blow has been the wall of indifference I’ve encountered trying to tell these stories — even from supposed advocates like the Disability Law Center of Massachusetts, the federally mandated protection agency for the Bay State. After seeing photos of Adam Graziano’s body pockmarked with bruises from behavior techs’ administering antipsychotics against his will, DLC Senior Attorney Nancy Murphy called Adam’s incarceration a “complicated situation” with “no clear violation of his rights.” As advocates and I continued to press Murphy to take action, her final email to us made it clear who was in control. “Please be reminded that any records release or conversations about Adam should be with the consent of his guardian,” she wrote. To this day, the guardian has not responded to any of my inquiries, and as of my last count, he is one of three attorneys handling more than half the guardianship cases at the facility in Western Massachusetts.

Despite all the challenges, I have more moments now — more experiences contributing to my belief that I can’t stand by as groups of people continue to be isolated and abused to what some advocates consider the point of torture. I know I am one small voice, but my stories are all I have left.