According to researchers, withdrawal symptoms from psychiatric drugs “may include anxiety, depression, mania, and psychosis, in addition to nausea and vomiting, tachycardia, lightheadedness, and diarrhea.” This is not an exhaustive list; many other symptoms have been reported.

Researchers David Cohen and Alexander M. Récalt, both at UCLA, wanted to discover how pervasively drug trials use rapid discontinuation practices; they also wanted to analyze how much data about relapse might be confounded by withdrawal symptoms. To that end, they conducted two studies, both published in the journal Psychotherapy & Psychosomatics.

In the first study, Cohen and Récalt identified all the randomized, controlled trials that featured psychiatric drug discontinuation practices (published since 2000)—a total of 80. They then determined the discontinuation procedures used in these studies.

Perhaps because the harms of benzodiazepine withdrawal are well-known to the public, trials of those drugs typically tested long discontinuations with supportive practice. The majority were tapered over eight or more weeks.

In 67% of all trials, the authors gave no reason why they used any particular discontinuation period, which rose to 78% in the 23 trials that used abrupt (same-day) discontinuation. Only 12 of the 80 trials even mentioned the possibility that any discontinuation could have resulted in withdrawal symptoms confounding their results, and five trials tried to analyze such a possible confound.

A double-blind procedure is a standard in drug trials—it ensures that neither the participants nor the researchers bias the findings by knowing whether they are taking the placebo or the active drug. 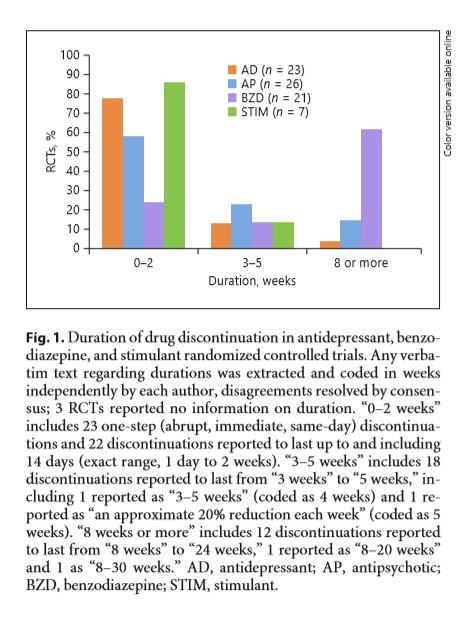 However, only about half of the studies here used a double-blind procedure, and of those, only 12 provided adequate information about how they used that process. Not a single study checked to see if their blinding methods were broken (i.e., asking participants if they figured out whether they were taking the drug or the placebo).

Six studies acknowledged that their blinding was probably broken due to such elements as the packaging of the drug giving away whether participants were receiving an active drug. This can severely bias the results of these studies.

“Especially in relapse prevention RCTs, drugs are rapidly or abruptly discontinued in order to compare drugged patients to nondrugged patients, and trials deliberately ignore cautions from the literature that such a method may subvert the logic of the comparison and potentially harm participants by inducing symptoms resembling those the drugs are meant to treat.”

In the second study, Cohen and Récalt wanted to determine how withdrawal symptoms might confound the results of these trials. That is, how much of the “relapse” that the drugs were preventing was actually due to withdrawal symptoms caused by coming abruptly off the drug?

After examining the data for how quickly psychiatric symptoms returned after drug discontinuation, Cohen and Récalt concluded that a high proportion of results were confounded by potential withdrawal effects. Around two-thirds of the studies were likely to have this problem.

“We have shown that the results of such trials may be confounded by the failure to account for drug withdrawal symptoms.”

Cohen and Récalt suggest that it is a significant flaw in the research literature that studies attempting to determine relapse prevention use discontinuation trials but do not specify their reasoning for how they go about this process. Even more problematic, they suggest, is that “sponsors and researchers design, regulators and institutional review boards approve, and journals publish trials whose key feature is based on unspecified logic or evidence.”

They suggest that peer reviewers and editors, who are supposed to judge the quality of studies for publication, can do more to ensure that basic reasoning is provided for the choice of study methods in discontinuation trials. Also, review boards, who are supposed to judge the risks and benefits of studies, can ensure that researchers include information about the dangers of withdrawal and the way that these effects might bias the supposed benefits of the drugs. The researchers conclude:

“Abrupt discontinuation is useful only to provoke reactions expected to contrast on average with those of participants not discontinued, thus putting the tested drug in a positive light—but potentially harming participants.”