At the end of my recent presentation about psychiatric drug withdrawal, a single comment was made aloud: “This is dangerous. Are we going back to Haldol?”

At that moment, I am afraid that I did not dare, nor had the instinct, to ask what danger he was referring to. Danger to the patients if they were to be treated with classic drugs, denying them the advantages of the newer ones?  Danger to our professional status should the standard prescribing practices of the last 20 years be questioned? Danger to the pharmaceutical industry if it turned out that the efficacy of current treatments was no better than the previous ones—even though they were much more expensive? Danger to society if the fabulous investment by developed countries in new antipsychotics for controlling symptoms were to prove inefficient, or even harmful to the population?

The Case for Withdrawal

I have been working as a psychiatrist for the last five years in Toro, Spain, a semi-rural community in the province of Zamora with a population of about 10,000 people.  This represents about 5.7% of the province’s total population. Though there has been little support among Spanish institutions for withdrawal from psychiatric drugs and few initiatives focused on reducing psychiatric medications generally, I have been pursuing this practice for several years now.

The main reason for supporting withdrawal, in my opinion, is for the sake and safety of the patient. In modern medicine, the concept of doing no harm is often described as “quaternary prevention,” which is defined as action taken to protect individuals from medical interventions that are likely to cause more harm than good.

A second reason is that by trying to avoid the excessive medicalization of the difficulties present in daily life, we allow a space for patients to develop a stronger sense of personal agency and autonomy. This would enhance the healing role that can be played by the local community as well as the processes of re-empowerment that are so critical to recovering from the experience of mental suffering.

In short, good mental health care should protect a person’s safety and security and provide adequate information to allow that patient to make the best decisions for his or her care.

There is also a potential benefit to society from psychiatric drug-withdrawal efforts. Unnecessary and prolonged treatments lead to chronicity, disability, and a never-ending increase in economic burden, all of which challenge the sustainability of health systems. Society should discuss and make decisions about how to reallocate resources currently spent on medical interventions that have not proven to be useful or have even been shown to be ineffective and harmful.

Although psychoactive drugs have become the main,  and in many cases the only therapeutic tool to alleviate the population’s psychological malaise,  their massive use by prescribing physicians is not justified or based on robust scientific evidence. Furthermore, there is increasing evidence that long-term exposure to psychiatric drugs worsens the prognosis of so-called mental disorders as well as the functionality and quality of individuals’ lives.

In short, there is currently not enough evidence to justify many of the prescribing practices commonly used throughout the world today, including:

Indeed, increasing evidence suggests that chronic use of psychotropic drugs not only fails to improve long-term outcomes but also increases overall morbidity and mortality as well as worsens the general functioning of people exposed to them.

My Experience with a Psychiatric Drug-Withdrawal Program

As I said, I have been working as a psychiatrist for the last five years in Toro. In addition to providing primary care services, the community provides psychosocial care, which is managed by the INTRAS foundation. The facilities here consist of a residential center, supervised homes, and a day-care center serving about 50 people diagnosed with “severe and prolonged mental illness.” The typical user profile is low income with minimal education and scarce social and familial support. Most patients have some sort of disability or dependence benefit and have no legal capacity to make decisions about their lives.

The average age of this user group is about 50 years. Many of them have required multiple admissions since their youth. On average, they have been in continuous psychiatric treatment for more than 15 years. It is common for them to be prescribed multiple drugs (combinations of several antipsychotics, mood stabilizers, benzodiazepines, and antidepressants) at doses in the highest maximum range.

In 2015, in coordination with the staff of INTRAS and the residents’ primary care doctors and nurses, I began a psychiatric drug-withdrawal program with an initial duration of five years. The objective of the program was two-fold:

At first, the effort was aimed at reducing antidepressant and antipsychotic prescriptions. The data on drug usage was provided by the pharmacy department of the Health District Area of Zamora, which compared the community of Toro with the rest of the province of Zamora.

During 2015-2018, almost 500 people were invited to participate in the program. Three-hundred-fifty accepted (70%). The main reason for refusing to participate was fear of relapse, as well as previous negative experiences with changes in medication. In many cases, people refused to try withdrawing from their medication because they had been told they should continue their treatment forever.

To achieve the objectives of the program, and after reviewing the limited literature on the subject, I was guided by the following principles:

Three years after starting the drug-withdrawal program, I was able to document:

The lower reduction in antidepressant expenditure, as well as the upward trend in 2015, could be explained by the introduction of new antidepressants (desvenlafaxine and vortioxetine) as well as the fact that these drugs are also prescribed by other doctors (family doctors,  geriatricians, neurologists, physicians, and anesthetists in pain units).

In global terms, as a result of the drug-withdrawal program, an accumulated savings of more than 150,000 Euros has been achieved in three years. These results contrast with the trends in spending and defined daily dose in the province of Zamora, which remained stable over the same period. 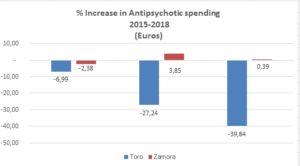 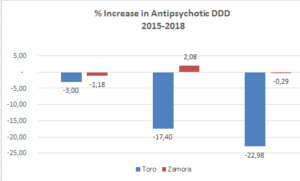 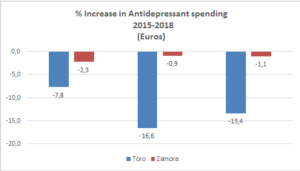 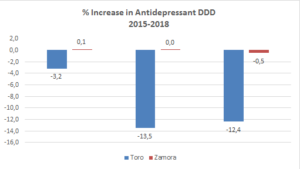 Barriers to the Drug-Withdrawal Process

I encountered various barriers, forms of resistance, and difficulties during the drug-withdrawal  process:

The preliminary objective conclusions of this study are that it is possible to decrease both spending on psychiatric drugs and patients’ chronic exposure to them, and that this can be done with no serious harm to the participants. In fact, no person in our study had to be admitted to hospital due to a dose reduction or treatment change.

My subjective assessment is that, in general, the drug-reduction process has been well-tolerated and has had good acceptance among those treated. Not surprisingly, patients have positively valued being offered a chance to participate in decision-making about their medication.

There is evidence that the use of low doses of antipsychotics, and for the shortest time necessary, may be better for the patient in terms of recovery and functionality. However, this result comes from studies of people suffering from a first psychotic episode. It is not clear whether a dose-minimization strategy would also be useful for patients on long-term treatment as is the case in this study. There are already important initiatives in progress in other countries (for example, the RADAR program of the NHS in the United Kingdom) so we will have to wait for the results.

And if we assume that it is never too late for recovery from such damage:

Regarding the economic consequences of a drug-withdrawal program, in the Spanish public health system (at least at the management level of a psychiatric service or a hospital), the reallocation of resources is not possible.  Thus, the savings in pharmacy spending will not go toward investment in more staff, training, research, or new assistance programs. Most likely, the money saved on pharmaceuticals will end up simply countering the excess of pharmaceutical spending in other areas or services.

It seems illogical that the healthcare system approves and finances very expensive treatments of doubtful long-term effectiveness (and with increasing evidence of their negative impact on public health) while community and social resources remain scarce. It is also absurd that doctors have to manage a crossfire of pressures from Big Pharma on one hand (which is trying to maximize sales) and the healthcare system on the other (which has approved new drugs yet strives to contain prescription spending and promote the “rational use of medication”). Yet neither the pharmaceutical companies nor the healthcare system will encourage or support a drug-withdrawal process.

In Spain, most people with disabilities due to mental illness have very low income with which to conduct a decent life. In Toro, many subsist on only a few euros per day, just enough for coffee and tobacco. Yet they are considered “lucky” for being prescribed, often without information or consent, the latest approved drug—usually the most expensive one. That is, money goes toward drugs but not to pay for other essential psychosocial, community, and economic support.

Maybe we should ask the patients what their needs are and what they would choose to do. Thus, they could share in at least part of the savings from unnecessary or even dangerous long-term medication.